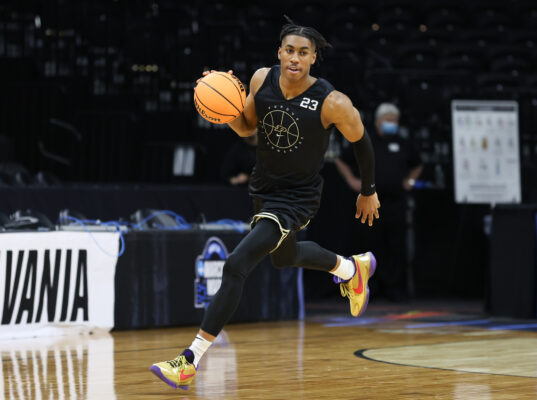 #15 seed St. Peter’s will fight to continue their improbable run against #3 seed Purdue. Only two #15 seeds before St. Peter’s were able to make the Sweet 16 and both had their runs ended in this round.

St. Peter’s Defense is No Joke

St. Peter’s has emerged as this year’s big Cinderella story. After a Sweet 16 run last year by Oral Roberts, St. Peter’s became the second consecutive 15-seed to make the Sweet 16 and third in NCAA Tournament History. Not only have no 15 seeds advanced past this round into the Elite 8, but neither have any 13 or 14 seeds, giving St. Peter’s an opportunity to make history. They’ll need to rely on their stringent defense for a chance to keep their miraculous run going into the regional finals.

During their current 9-game winning streak, St. Peter’s has possessed the NCAA’s top-ranked defense, allowing opponents to shoot only 35.8% from inside the arc. The Peacocks gave up just 55 points per game in that span, shutting down opposing offenses. St. Peter’s managed 7 blocks and 8 steals against Murray State in the last round, and will look for much of the same against Purdue.

Purdue is Tough to Beat

Purdue boasts an impressive 29-7 record, looking for their 30th win of the season against St. Peter’s. Despite their impressive performance in a Big Ten conference that saw 9 NCAA Tournament bids this season, they’ve struggled somewhat down the stretch. After averaging over 80 points per game in their first 15 games of the season, Purdue has managed to average just over 70 points in their past 12 games.

Purdue can’t afford to have a poor offensive showing against a strong defense like St. Peter’s. Fortunately, Purdue has playmakers all over the court. Senior forward Trevion Williams led the Boilermakers in scoring against Texas with 22 points off the bench. 7’4 sophomore center Zach Edey dominated the paint, posting his 11th double-double of the season. Purdue will need Edey to give them second opportunities off the glass against St. Peter’s if they find their shots not falling like they did against Texas.

I went into writing about this match confident that St. Peter’s magical run would end the same way as Oral Roberts’ last year and Florida Gulf Coast’s in 2013, bounced from the Sweet 16. However, after analyzing the trajectories of these two teams, I feel much less confident in Purdue’s ability to avoid the upset. St. Peter’s defense has gotten much stronger down the stretch while Purdue’s offense has gotten weaker. I think this game will wind up low-scoring and very close, with St. Peter’s lack of an answer for 7’4 Zach Edey ultimately tipping the scales in Purdue’s favor.