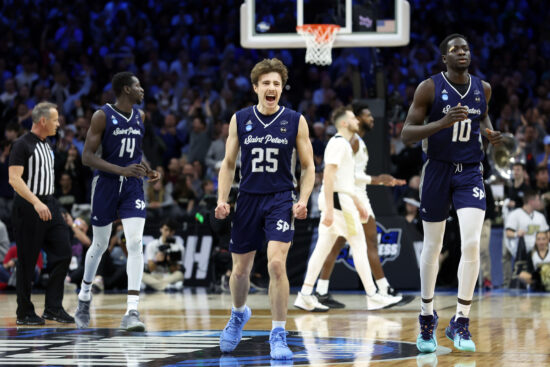 St. Peter’s kept their magical run alive with a 67-64 win over Purdue in the Sweet 16. The Peacocks fought and competed every step of the way and came out on top, becoming the first 15 seed to ever make the Elite 8. North Carolina trailed #4-seeded UCLA for much of their matchup before pulling ahead late and never looking back en route to a 73-66 victory.

#8 seeds like North Carolina have made the Final Four a total of 5 times.

St. Peter’s Continues to do the Impossible

St. Peter’s became the first team seeded higher than 12 to make the Elite 8, stunning the world while doing so as a 15 seed. The Peacocks now have big tournament wins over Kentucky, Murray State, and Purdue and will look to keep busting brackets into the Final Four with a win against North Carolina on Sunday.

St. Peter’s was led in scoring by junior guard Daryl Banks III who scored 14 points. They also got a passionate performance from their other junior guard Doug Edert, who has 53 points in the three tournament games so far. St. Peter’s finally cracked the Top 100 of the KenPom rankings, but as one of the final eight teams remaining in the tournament, they’re staking their claim as one of the best teams in not just the MAAC conference, but all of college basketball.

North Carolina upset 4 seeded UCLA on their way to their 3rd Elite 8 appearance in the past six tournaments. The Tar Heels are now 15-3 in their last 18 games. They managed to outpace a stringent UCLA defense en route to a 73-66 victory. North Carolina boasts a +46 point differential in their three tournament wins against Marquette, Baylor, and UCLA.

North Carolina was led by sophomore guard Caleb Love who scored a career-high 30 points against the Bruins. The Tar Heels had four players reach double figures and boast one of the NCAA’s most potent offenses. They have an incredibly interesting match-up next against a St. Peter’s defense that befuddled the nation’s most efficient offense in Purdue.

St. Peter’s has done the improbable three times so far this tournament. Is it too much to ask for them to do it once more? North Carolina has also pulled off some impressive upsets of their own on their way to the Elite 8. Both of these teams have surprised and are scorching hot and either one could emerge victorious. After seeing St. Peter’s dominant defense against Purdue, I think the clock won’t strike midnight on Cinderella just yet.