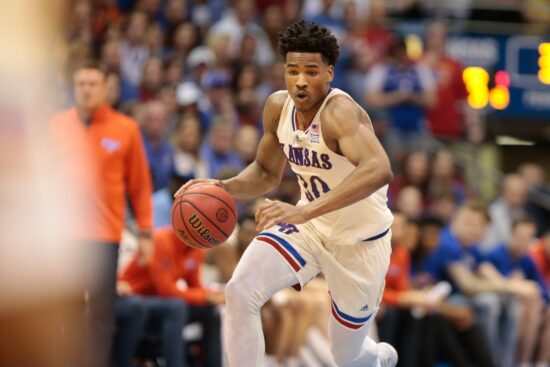 The Kansas Jayhawks were able to avoid the curse of the #1 seeds, unlike Baylor, Gonzaga, and Arizona. KU tries to keep their momentum going against the #2 seed Villanova Wildcats when the teams meet up in Saturday’s Final Four matchup in New Orleans. Kansas is a -4.5 favorite in this Final Four matchup, but +180 to win the National Championship, slightly behind Duke (+160).

Despite winning the Big East Tournament and getting a #2 seed ahead of March Madness, Villanova was still kind of an afterthought to make it out of the South and get to the Final Four. This was a region that featured Arizona, Tennessee, Houston and Illinois which many people considered more legitimate contenders than the Wildcats.

Nonetheless here Villanova is, being powered by the two-time Big East Player of the Year Collin Gillespie who could legitimately be considered the most decorated college basketball player of all time if he captures another National Championship. Gillespie did have just 6 points in the Elite 8 win over a very good Houston team (50-44), which shows you just how deep and dangerous the Wildcats are – or were.

Unfortunately for Villanova, they will be without Justin Moore who tore his Achilles on Saturday vs. Houston. Moore was having a great postseason run, scoring 21 in the opening round against Delaware and adding 15 to power the Wildcats past Michigan, so his absence will be huge.

Everything changes for the Wildcats with Moore out, not only affecting their #9 adjusted offensive efficiency but also their #18 defense. Gillespie’s experience will help, but Wright is going to need a lot out of Jaylin Samuels, who has led Villanova with 14.7 ppg this postseason.

Kansas Gets a Break

The Wildcats not having Moore is a huge blow, but Kansas still cannot afford to overlook this experienced Villanova team with a coach who is battle-tested in the postseason. The Jayhawks have done a great job of avoiding that so far in this tournament where #1 seeds were dropping like flies, so Saturday is just another test.

The good thing for the Jayhawks is that they seem to be playing their best basketball at the most opportune time of the season. Wins over Texas Southern and Creighton were expected, but Kansas’ win over Big East regular-season champion Providence in the Sweet 16 has given them momentum. It’s very underrated just how impressive Sunday’s 76-50 win over Miami was in the Elite 8 – as this is a Hurricanes team that has beaten Duke and North Carolina (both Final Four teams) and have had six of their previous seven losses coming by four points or less. Plus, Kansas was down six at the half before outscoring Miami 47-15 over the final 20 minutes.

Ochai Ogbaji has played like arguably the Most Outstanding Player of this tournament so far, putting up an 18/5/4 line to lead the win over Miami. The X-factor in the Villanova vs Kansas contest is 6’10 David McCormack, the preseason Big 12 Player of the Year who has been benched at times this season but showed his importance with 15 points and 4 rebounds vs. Miami. Villanova could be considered somewhat undersized, so McCormack can be a huge advantage on Saturday.

Villanova was going to have a tough time with Kansas even at full strength, but the loss of Moore is devastating. Gillespie and Samuels will keep the Wildcats in this for most of the first half, but Kansas is too deep and too good.