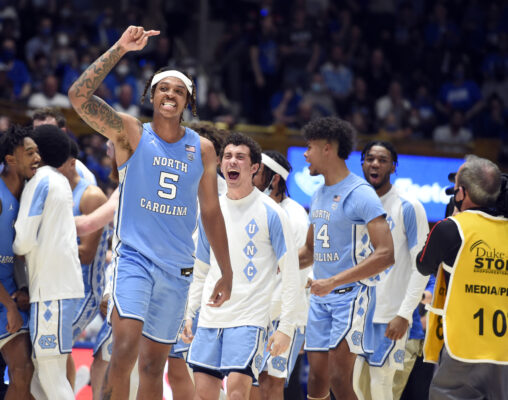 After upsetting defending champion and #1 seeded Baylor in the second round, North Carolina will try for another upset against #4 seed UCLA.

North Carolina dominated their first matchup against #9 seeded Marquette and were once again impressive in their massive win over Baylor. UCLA shut down #13 seeded Akron and #5 seeded St. Mary’s on the way to their 2nd consecutive Sweet 16 appearance. These teams have contrasting strengths, with North Carolina scoring 95 and 93 points in their first two tournament games while UCLA allowed just 53 and 56 points in theirs.

UCLA had established themselves over the past couple of years as a dangerous and high-scoring team. Despite the Bruins’ Final Four appearance last year, many doubted their ability to put up a similar performance this year thanks to inconsistent offensive performances. This year, and especially as of late, UCLA has made their mark on the defensive end. Ranked 38th in scoring defense on the season, they held both NCAA Tournament opponents under 60 points, something they’ve accomplished 15 times this season.

UCLA is justly led by their judicious juniors, Johnny Juzang and Jamie Jaquez Jr. Both averaging over 14 points per game, this duo was essential to UCLA’s Final Four run last season and once again holds the key to the Bruins’ success. Juzang started out the season scoring double figures in 21 of 22 games before Jaquez Jr. took up the mantle of the team’s most productive scorer, reaching double figures in his last 10 games. UCLA will need both Juzang and Jaquez Jr. to be on their best against a scorching hot North Carolina team.

After starting out the season at a mediocre 12-6, North Carolina turned up the heat, putting up a 14-3 record ever since. The Tar Heels’ hot streak has been especially scorching as of late, scoring 93, 94, and 95 in games against Baylor, Duke, and Marquette respectively in 3 of their last 5 games. North Carolina will need a similar performance against a UCLA defense that held both Akron and St. Mary’s to under 57 points.

North Carolina owes much of their offensive success to senior forward Brady Manek who has reached double figures in 15 consecutive games and scored a combined 54 points in UNC’s first two NCAA Tournament games. After Manek was ejected with 10:08 remaining in the second half against Baylor due to a controversial flagrant-2 foul call, sophomore guard R.J. Davis picked up the slack, filling in for Manek with a 30 point performance of his own.

UCLA made the Final Four with a similar roster in last year’s tournament and has shown few signs of struggle in their two victories thus far. North Carolina entered the tournament scorching hot, rising from the bubble to an eventual 9-seed and now the Sweet 16. Both of these teams are capable of making deep runs in this year’s tournament, but I like North Carolina’s hot shooting to send them past a very strong UCLA team.