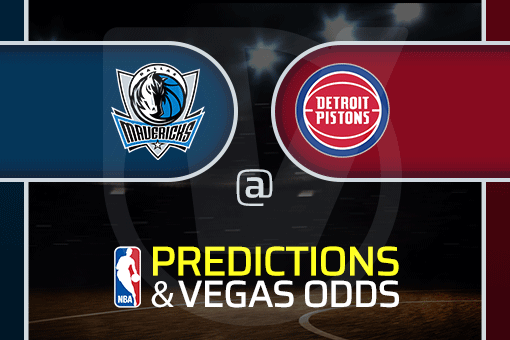 Looking for the latest Mavericks vs Pistons prediction? Look no further, because Vegas Odds has you covered.

Watch Luka and the Mavericks take on the youngest team in the league.

The Mavericks are 10-10 this season coming into Thursday night’s matchup with the Pistons. Averaging 109 points per contest good for 25th in the NBA.

Detroit on the other hand is also 5-18 this season scoring 109 ppg making them twenty-seventh in the association.

There has not been much to talk about this season with the Pistons. Losing does that to a team. Detroit is bad defensively, giving up 117ppg, which is 29th in the league, And they are equally as bad offensively.

Bojan Bogdanovic and Cade Cunningham lead the Pistons in scoring at 20ppg and 19ppg a piece.

The Pistons are dead last in the NBA right now while the Mavericks on the other hand are sitting in 9th place after a big win over the Warriors on Tuesday night.

Luka was outstanding on Tuesday.

Doncic put up another 40-point triple-double as his amazing 2022-2023 campaign continues.

Luka does everything for this team offensively and they struggle mightily with him off the floor. This game if it does get out of hand for Detroit could be an opportunity for Dallas to give Luka some rest so be mindful of that going in.

Dallas is 1-7 on the road this season while the Pistons are 3-7 at home.

The Mavs are 4th in the league in opponents’ ppg giving up just 109 ppg.

The Pistons on the other hand give up 117 ppg to opponents on the season, good for 29th in the association.

These two teams play similar styles as both are in the bottom half of the league in pace. But Detroit struggles on defense while the Mavs are one of the better defensive teams in the league.

Detroit will have its hands full as the NBA’s leading score comes to town.

Expect this matchup to go to script but with these teams playing at a slow pace so scores should not climb unless one team gets real hot from three.

The betting line is sitting at 215-220 for total points in this contest. The average total points between the two teams show that it should be in the range of 218 total points. I would be inclined to take the over.