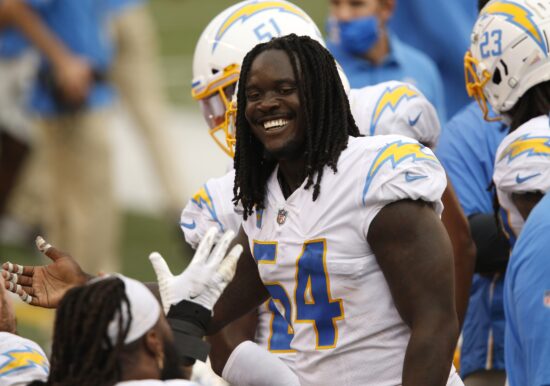 One of the top edge rushers in the league, Melvin Ingram, comes to Pittsburgh following a bad year with the LA Chargers. The veteran will try to bounce back to his previous level of play and help the Pittsburgh Steelers on their way to another playoff run.

The 32-year old spent all of his nine NFL seasons with the LA Chargers, but the team from the City of Angels didn’t want to offer him a new contract after the end of the last season. Previously, Ingram and the Chargers signed a four-year $64 million deal, one of the biggest in the league for one edge rusher.

And everything went fine in the beginning, with the player earning three consecutive Pro Bowl invitations from 2017 to 2019 but failed to play at that level in 2020.

The persistent knee problems would limit Ingram to just seven matches and prevent him from posting a sack for the first time in his career. So far, he posted 49 since coming to the NFL, becoming one of the best defenders in his generation.

Many started doubting his abilities and health, which is the probable reason why the Chargers decided to move on from the veteran.

On the other side, the Steelers needed a replacement for Bud Dupree, who jumped to Tennessee, and Ingram seemed like the perfect solution. Pittsburgh’s defense was one of the best last year, if not the best in the league, carrying the team to a fantastic start that saw them winning 11 consecutive matches. Later on, they would crash and collapse in the Wild Card game against the Cleveland Browns, 48-37.

Ingram will have a perfect opportunity to show that he still has some worth. He will be playing opposite TJ Watt, the AFC Defensive Player of the Year and the First-Team All-Pro member.

What About the Steelers?

At one moment last year, everyone believed that the Steelers could go all the way. Opening the season with 11 straight wins was something nobody expected, and at that point, the team from the Heinz Field looked superb.

However, at the finish of the season, the Steelers fell apart, losing four of the last five games and allowing 48 points in the Wild Card Game against the Browns.

Many suggest that the reason for that was Ben Roethlisberger and his poor form. Throughout the entire season, the defense was Pittsburgh’s strongest weapon, making the difference on the field and covering up Big Ben’s bad performances.

It seems that his accuracy is now pretty bad, and on top of everything, his hand is much weaker than before after all the injuries and health problems.

The Steelers are in a big problem because they have an elite defense, but on the other hand, a veteran and a legend at a QB position, which they can’t get rid of.