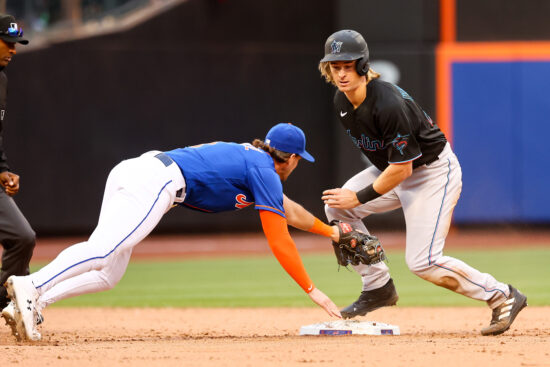 New York’s win pushed their lead in the NL East division back to 6.5 games. They also hold a 2.5-game lead over the rest of the National League conference.

The loss for Miami dropped them to 28-35. They now sit 7.5 games out of a playoff spot as they continue to fight to hang around in the mix.

After getting a bit of a scare in the standings from the red-hot Braves, the Mets are back in solid control of the NL East. Having won 5 of their last 6, the Mets own a 44-23 record, good for best in the National League and trailing only their cross-town rival Yankees in all of Major League Baseball. They’ll have a chance to sweep the Marlins on Sunday with starter Chris Bassitt (5-4, 4.01 ERA) taking the mound. Bassitt pitched an absolute gem in his last outing, holding the Brewers to no runs on just 3 hits through 8 innings pitched.

The Mets are equally potent on offense. Leading the way is second baseman Jeff McNeil, whose .324 batting average ranks 8th in the MLB. He’s been especially dominant in the month of June, batting .348 since the calendar last turned. New York also got two big home runs from their biggest recent signing in shortstop Francisco Lindor. After signing a 10-year, $341 million extension with the Mets last year, Lindor has had a modest start to his first two seasons in New York. He hit .230 last season and is hitting .243 so far this season. The Mets would become even more dangerous should Lindor heat up from his .182 June batting average.

The Marlins season has been defined by streaks and stretches. It almost seems like they have a switch that magically turns on and off. Since the start of the season, Miami has had the following stretches of games: 5-8, 7-0, 1-9, 4-2, 2-8, 8-3, and most recently 1-5. The Marlins have the capability to beat good teams, they just need to stay consistent. In their current 1-5 stretch, only two games finished with a difference of more than 2 runs.

The Marlins have their ace, Sandy Alcantara (6-2, 1.68 ERA) on the mound on Sunday. Alcantara’s ERA ranks 4th in all of Major League Baseball. He’s been dominant to start out this season. Miami will be hoping for another signature game from Alcantara on Sunday. On offense, the Marlins are led by outfielder Garrett Cooper. Hitting .313 on the season, Cooper has been a revolution for Miami. In the month of June, Cooper is hitting .429 with a 1.043 OPS.

The Mets have been playing really well as of late and are the better overall team. That being said, the Marlins are a lot tougher than a lot of people think. The biggest factor in this game is Alcantara’s presence on the mound. The Marlins have won 6 of their last 7 when Alcantara is starting, and I like those odds to continue on. I think the Marlins can do enough to avoid the Sunday sweep. Give me Miami in a close game.