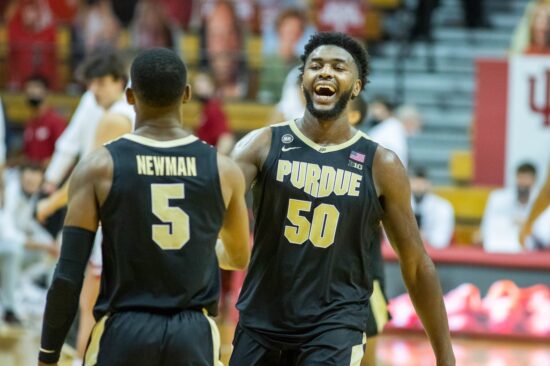 The Michigan Wolverines will travel to West Lafayette this week to face off against Big Ten foe Purdue. Purdue enters coming off of a showdown with Ohio State earlier this week, while the Wolverines look to get back on track after suffering their first conference loss of the year.

Michigan currently sits atop the Big Ten standings in a first-place tie with Iowa. They won their first 11 games of the season before dropping a road matchup at Minnesota.

The Boilermakers have been trending up of late, having taken down Michigan State, Indiana, and Penn State in consecutive outings.

Can Purdue keep up their winning ways or will Michigan leave with a strong road victory?

The defense should be able to continue its recent dominance when facing a Boilermakers offense that sits near the bottom of the conference in production at just 68 points a contest.

On offense, the Wolverines are led by center Hunter Dickinson, who leads the team in both scoring (16.8 ppg) and rebounding (7.7 rpg). The freshman phenom has notched double figures in four of his last five outings, including a career best 28-point performance two weeks ago versus Minnesota. The big man has connected on 72% of his shots from the field.

Dickinson gets some help from his frontcourt, with Isaiah Livers and Franz Wagner both averaging more than 12 points apiece.

The Boilermakers have been pretty good on defense themselves, holding opponents to less than 67 points per game. In their current three-game winning streak, Purdue is surrendering just 65 points a contest, while topping the 80-point mark in two of those three matchups.

Purdue will need to continue that defensive prowess when squaring off against the conference’s better offensive attacks. Michigan is averaging just under 80 points per contest, and will look to outscore a Boilermaker group that has been up and down on the offensive side of the ball.

That offense is led by Trevion Williams, who leads the team in both scoring (15.3 ppg) and rebounding (9.7 rpg). He’ll have the task of helping contain Michigan’s Hunter Dickinson, and may need to match him bucket for bucket to keep his team in the game.

Expect Purdue to keep this one tight with great defense, but the Wolverine scoring attack will prove just too much for the Boilermakers in the end. Michigan uses a late game surge to secure another Big Ten victory and stay atop the conference standings.