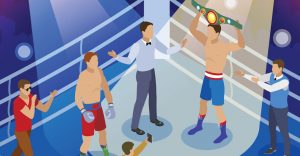 There will be an exciting fight in the lightweight division this weekend, as a fight that was scheduled for June earlier this year will finally take place. Miguel Vazquez and Lewis Ritson were meant to be meeting four months ago, but they will finally come to blows this weekend at the Utlilita Arena, Newcastle.

How To Watch: DAZN

Lewis Ritson will go into the fight with a huge advantage, as he will be boxing in his home arena. He is priced at -900 with Bet365 to get the win in this fight, and successfully defend the WBA Inter-Continental super-lightweight title that he won just last year. He won the title just over a year after suffering the only defeat of his professional career against Francesco Patera. That was Ritson’s first chance at the European lightweight title, but another could follow with a commanding win this weekend.

Since that defeat in 2018, Ritson has won his last three fights. The first of those was against German Argentino Benitez, which saw his win the WBA title that he currently holds. Ritson successfully defended that title in August last year with a third round TKO victory over Marek Jedrzejewski. His last fight came in October last year, as he beat his compatriot Robbie Davies Jr by unanimous decision in the same arena that he will be fighting in this weekend. But, could that be a lucky omen?

Vazquez Has Terrible Record Against Brits

This will be the 52nd fight of Vazquez’s career, and he currently holds a record of 42-9. He has won 16 of his fights by KO, while he has lost on two occasions via the same method. Seven of his defeats have come via decision, while he has won 26 times through decision. His last fight was against Jesus Valasco back in December last year, where he won in the fifth round via TKO. However, that victory ended in a run of two straight defeats.

His record against British fighters isn’t the best, as he has lost his last two against British opponents. The first of those was against Josh Taylor, with that defeat coming back in 2017. Vazquez was beaten via KO in the ninth round of that fight. Meanwhile, his most recent defeat against a British opponent was last year, when he was beaten in London by Ohara Davies. Vazquez will be hoping for a much improved performance on British soil this time around.

These two fighters both have proven pedigree in the lightweight division, but there is a feeling that Ritson will have far too much speed and power for Vazquez this weekend. The 27-year-old will get the win, and we can’t see the fight going the distance.