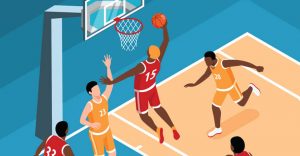 The Eastern Conference will bring us another fast-paced basketball action just hours from now when the Milwaukee Bucks head up to meet the Washington Wizards tonight at the Capital One Arena.

The Bucks are coming hot off a 119-98 home victory against the 76ers who have been their absolute nemesis this season with the final score usually favoring Milwaukee. The Wizards are also looking pretty decent, although they have already met the Bulls a week back and suffered a 126-117 defeat.

Nevertheless, Washington is a capable team able to play at a fast pace and put up a good fight. An eight-point difference in the final score is not the convincing victory that would make the game any less exciting to watch, so make sure to tune in and back your favorite team. Meanwhile, let’s take a look at what the sportsbooks think and the performance of both teams so far.

The Bucks are in a good spot, ranking top of the Eastern Conference whereas the Wizards are mere ninth. Even though the Pacers managed to beat them recently, Milwaukee has rallied with two consecutive victories, not least the one against 76ers.

Giannis Antetokounmpo was again the star of the 76ers game as he pushed his team fourth with 31 points and 17 rebounds. With the season intensifying, though, Giannis might have to skip as the team will then have to play the Raptors tomorrow, which makes for a very busy back-to-back schedule. He also skipped the previous game against the Wizards.

Meanwhile, the Bucks have quite the players against Washington. Take for example Khris Middleton who led with 51 points against the Wizards in their last game. Even not considering the two team’s record against each other, you can tell that Milwaukee are on fire this season with 22-5 in the general standing.

Not least of all, the Bucks score almost 120 points per match and that doesn’t come at the expense of defense where the Bucks allow 107.3 points on average.

Do the Wizards Have a Response?

Back to the Wizards, it’s easy to see why the team is struggling. It seems a team’s performance is just bound to fluctuate from one season to the next. In any event, Washington is no underperforming team.

Ninth in the overall standing they have just lost to Cleveland with 126-117. Even though they might let a few points slide, the Wizards have the talent to respond to the Bucks. Bradley Beal managed to hit an average of 30 points in the past few games, which means Milwaukee will have to pay attention to the up-and-coming player.

And speaking of specific performance versus the Bucks, Beal has been invaluable, netting 47 points in the last and only clash this season between the teams. Yet, the middling 13-14 home record shows that the Wizards are not very likely to win, even though we are sure they will do their best to try.