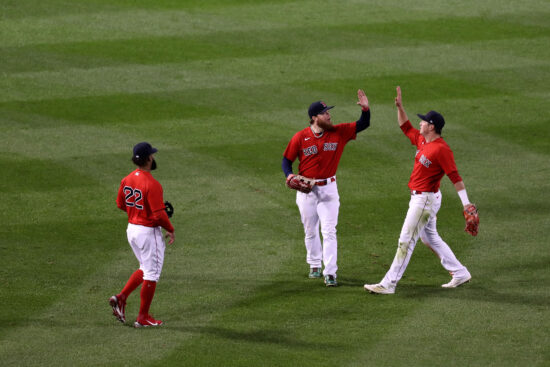 The Astros starters can’t handle the Red Sox offense. In the first three games of the series, the Astros starters have a total of 5.1 innings pitched. If the Astros want to have any chance in this series, their starters need to start giving them some length to start the game and limit the Boston offense. Earlier this season and last season the San Diego Padres were “dubbed” Slam Diego due to the number of grand slams they were hitting. The Red Sox are one-upping the Padres and doing it when the stakes are the highest.

Houston, We Have a Problem

The Astros starters haven’t made it out of the third inning in the first three games of the American League Division Series this year. In order for this team to even make this a competitive series, they need to give the bullpen some help and eat up some innings to start the game. Before the Astros even scored a run, which didn’t come until the top of the fourth inning, they were already down 9-0. Kyle Tucker put the first three runs on the board for the Astros with a three-run home run in the top of the fourth inning. That was all the Astros offense was able to put across against Eduardo Rodriguez and the Red Sox bullpen.

Zack Grinke, the Astros ace will take the mound for the Astros on Tuesday night. Greinke has one appearance in the 2021 postseason, with only one inning pitched and one strikeout. Greinke hasn’t pitched since his one inning of relief in game three of the ALDS against the Chicago White Sox. During the regular season, Greinke faced the Red Sox once. In that one appearance, Greinke only lasted three innings while giving up four runs on seven hits while only striking out two and walking one.

Houston, We Have Liftoff

Nick Pivetta takes the mound Tuesday night in an attempt to give the Red Sox a commanding 3-1 lead in the series. In Pivetta’s two appearances in the 2021 postseason, he has posted a 1-0 record with a 3.12 ERA in 8.2 innings pitched with eleven strikeouts. Pivetta hasn’t pitched in over a week, since game three of the ALDS against the Tampa Bay Rays, so he should be well-rested and ready for Tuesday’s contest.

Who Will Win Game 4 of the ALCS?

The Red Sox offense is too much for the Astros pitching staff to handle. If Grienke can’t give the Astros some length to start the game, he may become a “sacrificial lamb” and have to take one for the team and eat innings at any cost. Look for the Red Sox to strike early and strike often. Red Sox will take a commanding 3-1 series lead after Tuesday night.