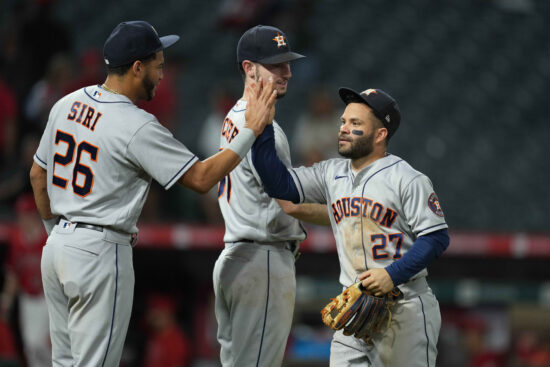 The Houston Astros go for the sweep and their 8th win in the last 9 games as they wrap up a 4-game series with the Los Angeles Angels on Thursday night. LAA meanwhile has dropped six in a row and 8 of their last 10 but it’s still not a bad price tag on Houston at -169. The Astros don’t have a ton to play for with an 8 game lead over the Mariners in the AL West, but they still want to wind down the regular season on a positive note.

Houston has plated 29 runs over their previous three wins against Los Angeles this week, abusing the Angels pitching staff and making Joe Maddon burn through a lot of relievers. The Astros have hit 9 HR so far this series, and have now scored 7+ runs in 6 of their last 8 games.

Yordan Alvarez, Chas McCormick, Martin Maldonado, and Yuli Gurriel have all put together an OBP of .400 or better over the past week. Can that success continue against Angels starter Alex Cobb who has allowed 3 ER total over his past five starts? Houston has hit Cobb well though, posting a .339 collective team BA vs. the right-hander.

Alex Cobb (8-3, 3.59 ERA) returned to the Angels last Thursday after being out since July 23rd with wrist inflammation. Cobb looked solid after missing nearly two months, allowing just 2 hits over 5.0 IP in a 9-3 win over the White Sox.

Are the Houston bats just transcending pitching matchups right now? The Astros are averaging 9 runs/game over their last four, and have hit Cobb pretty well in the past. Houston plated 4 runs against Cobb in just 2.2 IP in his only appearance against the team back in late April. Alex Bregman has gone 4 for 6 in his career against Cobb and Jose Altuve 3 for 6.

On the flip side, the Angels have struggled against McCullers managing just 6 runs in 25-2/3 innings vs. the right-hander this season. Los Angeles has hit just 4 HR as a team over the past week as well, meanwhile, Houston has 9 in just the last three days. Kurt Suzuki is also the only Angels batter hitting better than .250 the past week.

Houston has been priced -180 or higher in all three games in this series, so why does that number drop to -169 after three dominating performances? That’s a major red flag that indicates maybe the Astros rest some players prior to the weekend series in Oakland.