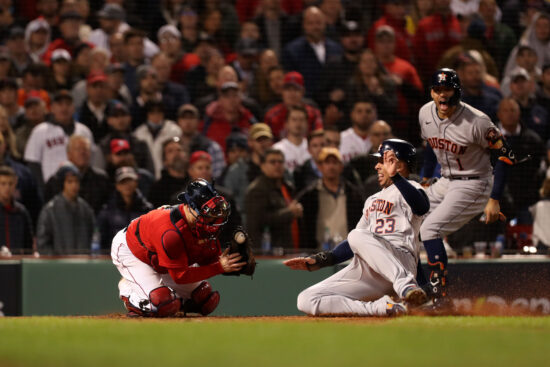 The Houston Astros were down by one going into the eighth inning. Things weren’t looking great as no team could push across any runs after the first inning. Then the comeback happened and Houston ended up taking the lead and tying the series. The Astros have one more game in Boston before heading back to Houston for games six and potentially seven if the series goes that far.

Astros Hold the Red Sox Without A Grand Slam, Finally

The Houston Astros struck first in the top of the first inning when Alex Bregman blasted a solo home run over the monster to give the Astros a 1-0 lead. After letting the Red Sox right back into the game in the bottom of the first inning, the Astros trailed for a majority of the game. For the first time in this series, we had somewhat of a pitching duel. In the top of the eighth inning, Jose Altuve hit another home run over the green monster to tie the ballgame at two. In the top of the ninth inning, the Astros completely opened up the game Jason Castro hit a single to center field, scoring Carlos Correa. Michael Brantly doubled to right field with the bases loaded, scoring Yuli Gurriel, Jason Castro, and Jose Altuve. Yordan Alvarez singled to left field Scoring Michael Brantly. Correa singled on a soft ground ball back to the pitcher, scoring Alex Bregman. To complete the seven-run ninth inning, Kyle Tucker singled to second base scoring Alvarez.

In an attempt to leave Boston with a 3-2 series lead, the Astros are looking to their left-hander Framber Valdez to take the mound Wednesday evening. In his two postseason appearances, Valdez has pitched a total of seven innings with eight strikeouts, with a 7.71 ERA. In his one appearance again the Red Sox in this series, Valdez pitched in 2.2 innings allowing three runs on six hits while striking out two and walking three.

The Boston Red Sox have played great in this series, limiting the big inning and keeping the Astros offense at bay. Unfortunately, the Red Sox weren’t able to do that Tuesday night, costing them the ballgame. Down 1-0 early, the Red Sox immediately answered back with a monster, two-run home run in the bottom of the first inning by Xander Bogaerts. Unfortunately for the Red Sox, that was all the offense that they had in the tank for the day, and were shut out for the rest of the game, with only three hits given up by the Astros bullpen the rest of the game.

To try to stop the Astros momentum, is the Red Sox left-hander, Chris Sale. So far in his two postseason appearances, Sale has pitched to the tune of a 14.73 ERA over 3.2 innings while striking out four. In his one appearance so far in the ALCS, Sale pitched 2.2 innings allowing one run on five hits while striking out two and walking one.

Who Will Win Game 5 of the ALCS?

The Astros are building momentum and they need to get to Chris Sale early to show that they are ready to take the series lead heading back to Hoston to potentially close out the series on Friday night. Look for the Astros to outduel the Red Sox, and come out victorious in game five of the ALCS