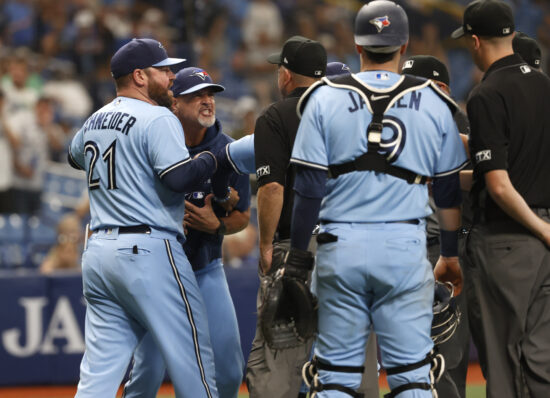 The Toronto Blue Jays have fallen out of the 2nd wild card spot, with Wednesday’s loss to Tampa Bay putting them ½ a game back from the Yankees. New York is idle on Thursday, which means Toronto can pull back into a tie for the 2nd postseason position with a win over the Minnesota Twins. The Twins pulled off a 2-game sweep of the Cubs in Chicago, but had dropped 2 of 3 in Toronto last weekend.

It’s the 2nd consecutive start vs. Minnesota for Toronto pitcher Steven Matz (13-7, 3.64) who gave up just 3 hits over 5-2/3 last Saturday in a 6-2 Blue Jays win. That marked the 4th straight time the Blue Jays had won a Matz start, with the left-hander allowing 2 ER or less in three of those games.

The Blue Jays bats need a bounce-back game on Thursday. Toronto had scored 4+ runs in four straight games but were held to just 4 hits by Luis Patino and a gang of Tampa Bay relievers in Wednesday’s 7-1 loss. Toronto’s offense had a hard time getting going when they faced Twins starter Michael Pineda last Friday, managing just 3 hits over 5-2/3 scoring their lone run against Pineda on a solo Vlad Guerrero, Jr. HR.

Guerrero, Jr. comes into this game hot having a hit in 7 of his last 14 ABs. Lourdes Gurriel, Teoscar Hernandez, and Marcus Semien all have multiple HRs over the past week, but Pineda has given up just one in his past three starts.

Twins Have Had a Good Week

Minnesota took a quick two-game trip to Chicago and left with 9-5 and 5-4 wins over the Cubs. That wrapped up a 3-2 road trip with both losses coming in Toronto over the weekend. Now the Twins return home to Target Field where they are 2-7 in their last 9 games.

The Twins belted out 16 hits in Tuesday’s win with Josh Donaldson, Max Kepler, Nick Gordon, and Mitch Garver all having 3-hit games. Kepler added 3 more hits on Wednesday including 2 HR and is now 6 for his last 9 with 5 RBI. Minnesota is just 7-17 their last 24 vs. a LH starter though, and have only a .179 team average vs. Matz (7 for 39). Donaldson has 4 of those hits in 13 AB, with 3 of the hits being HRs.

Minnesota’s offense has looked great the last two nights and they’ve got a lot of hot hitters coming into this game. Matz could be the extinguisher that cools the Twins bats down though, and even though Minnesota is back at home that’s not necessarily a good thing as they’ve dropped 7 of the last 9 at Target Field.