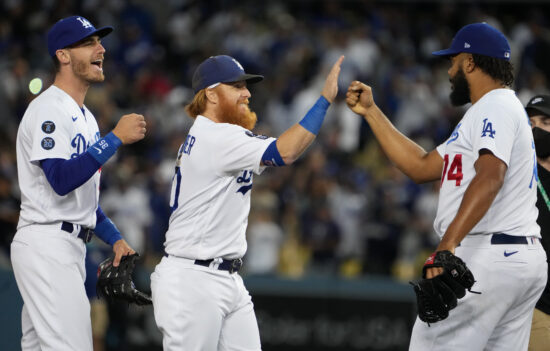 The Los Angeles Dodgers sparked the home crowd and came out victorious in game three of the National League Championship Series again the Atlanta Braves. Despite using nine pitchers and their starter only lasting 3.2 innings, the Dodgers were able to find a way to win. The Braves need to win game four to avoid the Dodger from gaining too much momentum in the series.

Atlanta Needs To Keep With Their Game Plan

The Atlanta Braves, after winning the first two games at home, lost the first game on the road in the NLCS. The Braves, if they stick to their game plan, can ensure that the Dodgers don’t get too much momentum in this series. After giving up two runs in the first inning, the Braves came back in the top of the fourth inning with a vengeance. Joc Pederson started the scoring for the Braves with a single to right field scoring Freddie Freeman. Next, Adam Duvall singled to left field, scoring Austin Riley. Dansby Swanson then followed that with a sharp single to the shortstop, scoring Joc Pederson. With the bases loaded, Eddie Rosario walked, scoring Adam Duvall, giving the Braves a 4-2 lead. In the top of the fifth inning, Adam Duvall singled sharply to center field, driving in Ozzie Albies for his second RBI of the game, giving the Braves a 5-2 lead. Unfortunately for Atlanta, that was all the offense had in the tank on Tuesday.

With no Braves starter yet announce, looking back at how the rotation has worked out so far I have to assume that their left-hander, Max Fried will take the mound. Friend has pitched in two games so far this postseason, posting a 1.50 ERA over 12 innings pitched with 14 strikeouts. Fried last pitched on October 16, where he pitched in six innings and gave up two runs on a scattered eight hits while striking out five and walking none. The other potential is that the Braves go with a bullpen game, but it seems unlikely with Fried having four days rest and so far this postseason, the Braves have only used the three starters.

The Dodgers Need to Come Out Hot

The Dodgers started the game hot, before squandering the lead in the middle innings, before regaining the lead in the eighth and not giving it back. In the top of the first inning, Corey Seager sent a home run deep over the center-field wall giving the Dodgers an early two-run lead. The Dodgers didn’t score again until the bottom of the eighth inning, where they were down 5-2. Cody Bellinger, after having a down year this year, came up with two on, and blasted a home run over the right-center-field wall, tying the game at five. After a Chris Taylor double, Mookie Betts did what he did all season, and sent a double to right field, scoring Taylor, as the winning run.

For game four of the NLCS, the Dodgers are sending Julio Urias to the mound. Urias, who has appeared in three games this postseason, has a 1-0 record with a 3.60 ERA over 10 innings pitched with 12 strikeouts in those 10 innings. Urias pitched one inning against the Braves in game two where he allowed two runs on three hits, with two strikeouts.

Who Will Win Game 4 of the NLCS?

The Dodgers definitely have the momentum after their four-run eighth inning in game three. Look for them to come out of the gate hot on Wednesdays and keep their foot on the pedal, while their starter Julio Urias keeps the Braves bats quiet. The Dodgers take game two and even the series, 2-2.