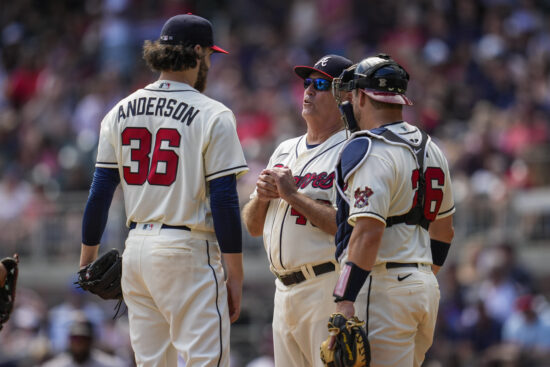 A couple of 1st place teams with their leashes tightening meet up for a weekend series at Oracle Park. Both the Atlanta Braves and San Francisco Giants come into Friday’s series opener on a two-game losing streak, Atlanta still with a little padding up three games on the Phillies. SF on the other hand can’t seem to pull away from the Dodgers, with their lead over L.A. down to one game in the NL West.

Ian Anderson (7-5, 3.61 ERA) gets an extra day of rest heading into Friday’s series opener as he was the scheduled starter in Thursday’s home rainout against Colorado. The off day is huge for Atlanta, not only letting the team reset a bit after a two-game losing streak but also letting them take off some of the sting of the 2,500 mile trip to the West Coast.

Anderson has had a couple of rough starts his last two on the road, allowing 8 ER while lasting a total of just 5.1 IP. One of those outings was at Coors Field which can be forgiven, and overall Anderson’s home/road splits aren’t that different (3.58 / 3.64).

The Giants offense is on a roll with 6+ runs scored in 10 of their last 11. The last time SF was shut out was August 29th, when the Braves topped the Giants 9-0 thanks to 5.2 IP of shutout ball by Anderson.

San Francisco and Los Angeles have had one of the better division battles in recent history – and they’ve done it all season long. The teams have the two best records in baseball, are each 8-2 over their last 10, and the Dodgers are just one game out of the 1st place hunt.

The Giants offense will be up against a pitcher with an extra day of rest, but how do you bet against these bats right now? Brandon Belt, Brandon Crawford, and Kris Bryant have all posted an OBP better than .500 over the past week, and Evan Longoria has knocked in 12 RBI over the past six games.

The Braves having the (unscheduled) off day on Thursday could loom large here, but at the same time, the Giants are smacking the ball around, seem to always win when Webb starts, and desperately need this victory to stay ahead of the Dodgers.