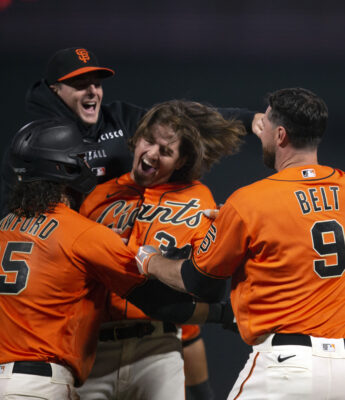 If the Atlanta Braves aren’t careful they’re going to lose what at one point was almost a surefire NL East Crown. The Braves 6-5 loss to the San Francisco Giants was Atlanta’s 3rd in a row, which has allowed the Phillies to close the gap to two games in the division as they’ve won three straight. The Giants are in a fight of their own though, with their lead in the NL West up to two thanks to a Dodgers loss on Friday night.

Atlanta players need to sleep in on Saturday morning because the series opener between these two teams was mentally and physically exhausting. The Braves went from possibly winning Friday’s game with a 3-run 9th inning HR by Travis d’Arnaud to having the game tied with a 2-strike, 2-out HR from Donovan Solano in the bottom of the frame to having the Giants when with a pinch-hit, pitcher sacrifice fly in the 11th.

Now the Braves need to regroup so they don’t tie what would be a season-high 4-game losing streak. Atlanta scored two runs during their first five batters to the plate on Friday night, but once again pitching failed them as the Giants had things tied up once the 1st inning was over. Brian Snitker used six relievers in the opener, so Charlie Morton (13-5, 3.49 ERA) needs to step up and be a stopper here.

The good news is that Morton should give that bullpen a little bit of reprieve, as he’s completed at least 6.0 IP in 7 of his last 8 starts. Morton is also 8-2 with a 2.91 ERA on the road this season and has allowed 2 ER or less in six of his last eight overall.

Big Question Game for Wood on the Mound

San Francisco has had to get creative in using a few bullpen days over the past couple of weeks as they battle injuries and illnesses in their starting rotation. It has worked, as the team has maintained a lead over the Dodgers even though L.A has been red hot, and that pitching staff also gets a little healthier on Saturday with Alex Wood (10-4, 4.08 ERA) returning from the COVID list.

There’s no telling what to expect out of Wood in this matchup as he hasn’t taken the bump since August 26th. Instead of simply testing positive asymptotically, Wood actually spent over a week fighting off the virus. Will that leave him weak, or can he walk through the clubhouse doors and instantly return to the pitcher that gave up 6 ER total in three starts before getting sick?

The Giants offense can certainly do their part in getting Wood a W in his return to the team. San Francisco got back on the winning track after losing two vs. the Padres last series, and Friday’s victory was their 11th time in the last 12 games scoring at least six runs.

We really don’t know what to expect from Wood in his return. Although the Giants used only four relievers even in the 11th inning game on Friday, Morton is more of the sure thing in this one, and the Braves did have their chances at a win in the series opener.