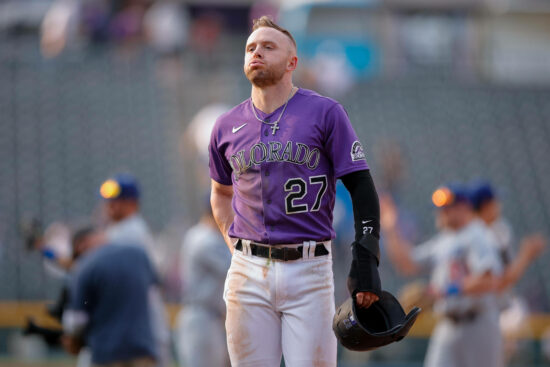 Do any conspiracy theorists believe that the Colorado Rockies will take a dive against San Francisco Giants this weekend so that the high-spending Los Angeles Dodgers have to go in the wild card play-in game? The Rockies were only able to get one when L.A visited for a three-game series this week but that has still helped SF hold on to a 1-game lead in an NL West race that looks like it’s shaping up to come down to the last weekend of the year.

The Giants have gone 15-6 so far in September, a solid record as they try to clinch the NL West and avoid the wild card game. The weekend would look like an easy matchup with the 4th place Rockies who are 27.5 out in the NL West, but Colorado is also 46-29 at Coors Field this season.

A lot of the Rockies’ success at home came over the mid-point of the season though, as they are just 3-7 over their last 10 at Coors Field. The Giants offense definitely likes the opportunity to go hit in Denver, as they just put up 20 runs in a three-game series at San Diego. San Francisco has hit just 3 HR over the past week as a team, so getting to play in the atmosphere of Colorado should help pad those numbers a bit.

Alex Wood (10-4, 3.99 ERA) takes the hill for San Francisco in his 2nd start back from the COVID list. Wood didn’t allow a run last Saturday, but also only threw 3.0 innings as he tries to get his stamina back. Wood gave up just 2 ER over 4.0 IP in his only start at Coors Field this season and has a 3.06 ERA in three starts vs. the Rockies in 2021.

This weekend is the second time visiting Coors Field this month for the Giants, who picked up a 3-game sweep from September 6th – 8th. The San Francisco offense had a big offensive showing in that weekday series, outscoring the Rockies 29-12.

Colorado is still 17 games above .500 at Coors Field on the year, but they just lost a series to the Dodgers at home. Los Angeles also sent the top three contenders for the NL Cy Young to the mound as Julio Urias, Walker Buehler, and Max Scherzer were all up in the rotation. The Rockies also tagged Urias for 4 ER on Tuesday, Buehler for 5 on Wednesday, and Scherzer for 5 on Thursday which is a very impressive run.

Facing San Francisco’s Wood is going to seem easy for the Rockies offense after facing the Dodgers murderer’s row of pitchers over the last three nights. That puts the pressure on Colorado pitcher Peter Lambert who hasn’t thrown in the majors in 735 days. Lambert had Tommy John surgery in 2020 and finally completes his long road back to the MLB on Friday night.

If Colorado had any sort of regular rotation pitcher throwing on Friday night they’d have an edge, but San Francisco’s offense is unapologetic in that regard. Both teams will probably be going to their bullpens early as Wood works his way back from COVID protocols. The total is 12, and this game will see all of that and then some.