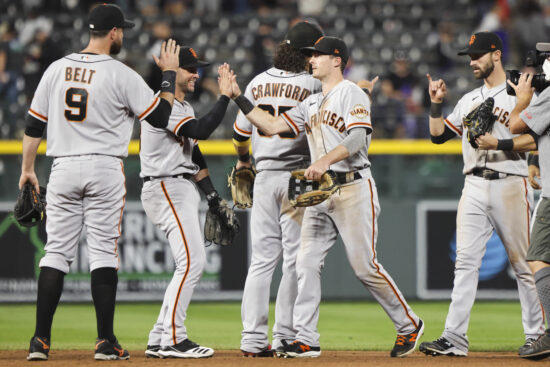 The free fall at Coors Field continues for the Colorado Rockies, who will try to avoid a sweep at the hands of the San Francisco Giants on Sunday afternoon. Colorado was 45-23 at home before dropping 8 of their last 9 in Denver. The Giants will take it, as their consecutive wins have helped push SF’s lead in the NL West to 2 games with 7 to play. San Francisco is a -170 favorite to pull off the sweep.

Like many teams, San Francisco enjoys their visits to Coors Field. The Giants pulled off a 3-game sweep in Denver from September 6th – 8th while outscoring the Rockies 29-12. That trend is continuing over the weekend with SF pulling off back-to-back 7-2 wins.

The Giants hit four HRs on Friday night, and Brandon Belt went yard twice in Saturday’s win. Both teams have rattled off 22 combined hits over the last two nights, but SF has made more of those opportunities in outscoring the Rockies 14-4 so far.

Kevin Gausman (14-6, 2.92 ERA) will try to keep that many Rockies off the basepath when he takes the mound Sunday afternoon. The Giants are 3-2 in Gausman starts in September, and during that time he was solid at Coors Field in giving up 3 ER over 7.0 IP on the 6th. Gausman has his highest ERA of the season over the course of the past month.

Colorado was able to take one from the Dodgers at Coors Field last series, but can they avoid the sweep against San Francisco? With Saturday’s loss, the Rockies have now dropped 8 of the last 9 vs. San Francisco on the season, which doesn’t give them much value even at +150.

To their credit, the Rockies are getting hits this series, but they haven’t gotten the instant offense that San Francisco has. Colorado has no HRs over the last two games, but that could change against Gausman especially with Garrett Hampton going 4 for 9 (.444) with 3 HR vs. the SF starter. Charlie Blackmon is also 5 for 12 (.417) in his career vs. Gausman.

Colorado starters have only pitched into the 4th and 5th innings the last two nights respectively, so Antonio Senzatela (4-9, 4.14 ERA) doesn’t have a lot of back-end help behind him Sunday. The Rockies have won four of the last five Senzatela starts, their only defeat coming 5-4 in extra innings against the Dodgers the last time out. The right-hander has only allowed 5 HR in 14 starts at Coors Field, which is a good trend the way San Francisco has been hitting the ball.

The Rockies have lost 8 of 9 at home, but Sunday could be the day they get one. Gausman has faded a bit down the stretch for St. Louis and Senzatela has done a great job of limiting HRs at Coors Field this weekend. It’s only a matter of time before the Rockies turn all these hits into runs.