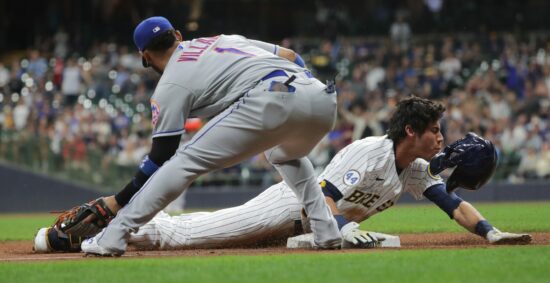 Both the New York Mets and the Milwaukee Brewers are limping towards the finish line of the 2021 season. The big difference is that the Brewers have locked in a trip to the postseason and can clinch the division with a win over the Mets and a loss by the Cardinals. New York is just waiting for this excruciating year to be over, although they aren’t mathematically eliminated yet.

Mets Have Checked Out

New York lost the series opener at American Family Field 5-1 on Friday night, their 3rd straight defeat and 8th in the last 9 games. The Mets are now 8 back in the NL East with 9 games left in the season and New York has less than a 0.1% chance of making the playoffs.

The Mets managed just 4 hits in Friday night’s loss, and it looks like they’ll be lucky to get that many on Saturday against Milwaukee’s Corbin Burnes. The Brewers starter has struck out 25 batters in his last two starts, and the Mets have just a .209 team average vs. Burnes. Pete Alonso is the rare Mets player with success against Burnes, going 3 for 4 in his career.

Rich Hill (6-7, 3.87 ERA) probably shouldn’t expect much run support on Saturday night opposing Burnes. The Mets have lost 5 of the last 7 times the veteran left-hander Hill has taken the hill, and really don’t have any value even as +183 underdogs.

Lock It In Behind Burnes?

The last time the Brewers lost a Corbin Burnes (10-4, 2.34 ERA) start was on July 7th, 4-3 against these Mets as +160 underdogs back when Jacob deGrom was healthy for New York. Burnes did his part going 5.2 IP while allowing just one run.

Since that lost to the Mets the Brewers have 11 straight times that Burnes has taken the hill. He has allowed 3+ ER in three of his last five starts, however. The right-hander has also put up a little better numbers on the road (7-0, 1.64 ERA) compared to at home (3-4, 2.99 ERA) so is the price tag of Milwaukee -202 a bit too high?

Another reason why the Brewers are by no means a lock on Saturday night is because they had lost five straight before the series-opening win over the Mets. Christian Yelich had a big night with a HR and a triple, while Kolten Wong and Willy Adames also added long balls. Yelich is 4 for 11 (.364) in his career vs. Mets starter Hill.

The Brewers want to celebrate the NL Central title with their own fans, so they only have two chances to do so while going on the road after Sunday’s game for the final six contests of the regular season. Throw in Burnes on the bump and Milwaukee should dominate here.