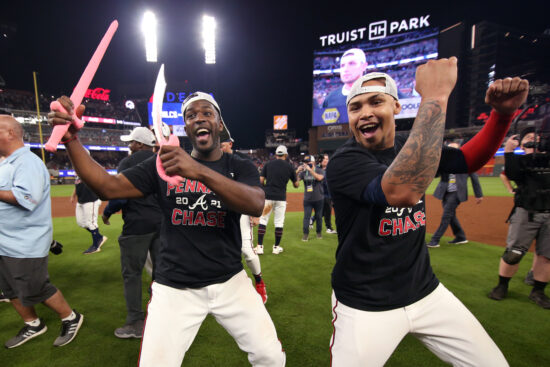 The Atlanta Braves will host the Los Angeles Dodgers in a best of seven series starting Saturday night. The Dodgers will be the away team despite having the better record since they were a Wild Card team and the Braves were a division winner. After the series we saw between the Giants and Dodgers that went down to the last pitch, this series may be a bit of a disappointment, but with the way playoff baseball is, you don’t have to be the better team throughout the season, you need to be the better each on that individual night.

The Dodgers clinched a National League Championship Series birth on literally the final pitch in the bottom of the 9th inning on Thursday night against the San Francisco Giants. The Dodgers did something completely unconventional for Game 5. Not only did they use two openers before their “starter” Julio Urias came into the ballgame, but they also used Max Scherzer, the starter and potential Cy Young winner, to close the game. These facts also just further proof that anything can happen in playoff baseball, and all things can and will be considered in order to secure the victory.

If I had to make a bet as to what the Dodgers’ pitching plans are to start this series, it’s going to be Max Scherzer. If the Dodgers’ manager asked Scherzer if he can throw on Saturday and he says yes, there is no way that he doesn’t start game one, despite just earning his first career save Thursday night. So far in this postseason, Scherzer has one no-decision, one loss, and one save. Scherzer only threw 13 pitches on Thursday to close the game for the Dodgers to clinch an NLCS berth, so essentially Thursday was a high leverage bullpen session. So far in the three appearances that Scherzer has in the postseason, he has pitched in 12.1 innings while posting a 1.29 ERA while striking out 16 batters and only walking four. Look for Scherzer to come out strong in game one against the Braves.

Are The Braves Ready For The Red Hot Dodgers?

The Atlanta Braves secured their National League Championship Series birth on Tuesday by defeating the two-seed, and National League Central winner Milwaukee Brewers, 3-1. The Braves are well-rested and ready to go. The Braves scored 12 runs in their four games of the Division Series, which might not be enough to contend with the defending champion Dodgers. The Braves offense needs to be on their “A” game while the pitching staff needs to come out of the gates firing on all cylinders.

For game one of the National League Championship Series, the Braves will be sending their 27-year-old left-hander Max Fried to the mound. Fried pitched against the Brewers in game two and had a stellar outing. Fried pitched six innings allowing only three hits and no runs, no walks, all while striking out 9 opposing batters. Fried has faced the Dodgers twice this season and fared quite well against the 106 win team. Fried posted a 1-0 record in two starts amassing a 2.25 ERA over 12 innings pitched while striking out 13 and only walking one.

Who Will Win Game 1 of the NLCS?

On paper, the Atlanta Braves seem completely overmatched when being compared to the Los Angeles Dodgers. What will be on the Braves side for game one? First, the team is well-rested compared to the Dodgers who have just played a hard-fought battle two days ago Also, the Braves are at home, so after that hard-fought victory, the Dodgers had to get on a plane and fly across the country. Look for the Braves to steal a victory in game one.