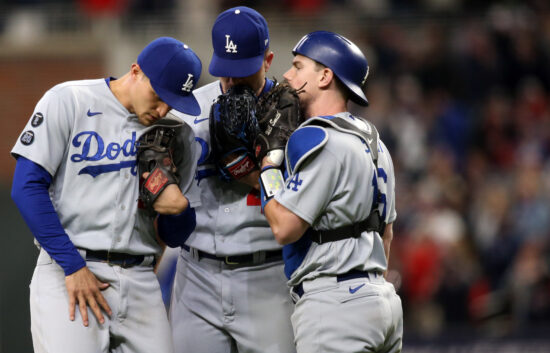 When the playoffs started, there were experts talking that the Braves don’t deserve to be in, despite winning the National League Division. They had to worst record out of all playoff teams. Now, the Braves are up 2-0 in the best of seven National League Championship Series against the defending champion Los Angeles Dodgers. Not only are the Braves up 2-0 but both of those wins came down to their last at-bat, and they walked off the Dodgers both nights.

Keep On Walkin’ It Off

The Atlanta Braves have scored eight runs over the first two games of the National League Championship Series against the Dodgers. there are only two runs that really stand out though, and those are the two that came in the bottom of the ninth inning in both games, sealing the victory for the Braves, and ultimately putting them two wins away from going to the World Series. On Sunday, The Braves were down 2-0 early until the bottom of the 4th inning when Joc Pederson hit a two-run home run. Going down two runs again, in the bottom of the eighth inning the Braves came back to tie the game. Ozzie Albies singled, and Austin Riley doubled each driving in a run, tying the game at four. In the bottom of the ninth inning with a runner on second, Eddie Rosario hit a sharp grounder up the middle, bouncing off Corey Seager’s glove, scoring Dansby Swanson, to give the Braves their second walk-off victory in as many nights.

For the first game on the West Coast, the Braves are sending their right-handed veteran, Charlie Morton to the mound. Morton, who has pitched in two games this postseason, has a 0-1 record with a 3.86 ERA over 9.1 innings pitched and struck out 14 batters in those 9.1 innings.

Can The Defending Champs Avoid Going Down 3-0

The Dodgers can’t catch a break. Two of their best relievers in Blake Treinen and Kenley Jansen both gave up runs in the bottom of the ninth to give the Braves two straight wins. It’s very unlike the excellent Dodgers bullpen to allow late-inning runs, but in the postseason, anything can happen. The Dodgers went up 2-0 in the top of the first inning on a two-run home run by Corey Seager. After allowing the Braves to tie the game, the Dodgers scored two more runs in the top of the seventh on a Chris Taylor double, giving them another two-run lead. That lead was quickly erased in the bottom of the eighth and ultimately squandered in the bottom of the ninth to cause the Dodgers to go down 0-2 in the best of seven series.

Who Will Win Game 3 of the NLCS?

The Braves definitely carry a lot of momentum to the West Coast. Both starting pitchers haven’t had a lot of success so far this postseason, but I have a gut feeling that Charlie Morton is going to be on the wrong side of the Dodgers offense on Tuesday night. The Dodgers are going to pull out all the stops to avoid going down 3-0. Look for the Dodgers to make this series exciting and pull out the victory on Tuesday.