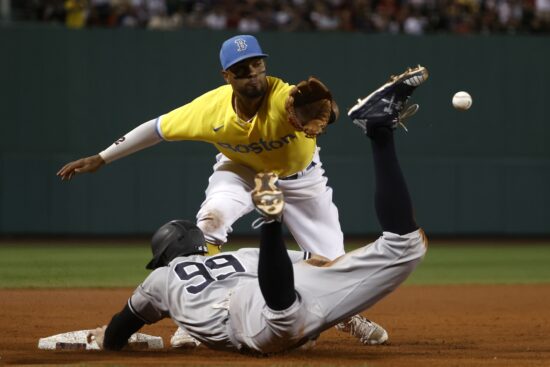 The Yankees and Red Sox on Sunday Night Baseball with an opportunity to take sole possession of a Wild Card spot? Baseball’s oldest rivalry is alive and well as just over a week remains in the 2021 season.

The Yankees won the first two games of the series and will look to complete the sweep. The Red Sox still leads the overall season series and will try and bounce back on Sunday.

It looks like we are in for a very close and interesting match.

The Yankees were underwhelming during the first half of the season, and some even suggested they should sell at the deadline. Instead, they traded for sluggers such as Anthony Rizzo and Joey Gallo, and they now find themselves right in the midst of the Wild Card Race.

Left-hander Jordan Montgomery (6-6, 3.55) will look to help the Yankees finish off the Sox at Fenway on Sunday Night. He will look to continue a string of good Yankees pitching in the series, which has held Boston to just three runs in each of the first two games.

Sox Need Hits When it Counts

The Red Sox produced a modest total of 7 hits in each of the first two games. However, as aforementioned, they were only able to score three runs in each contest. If Boston wants to avoid the sweep, they will need to hit with runners in scoring position.

Taking the hill is lefty Eduardo Rodriguez (11-8, 4.97), who will be tasked with facing this deep Yankee lineup. If the Red Sox can score some runs, and Rodriguez can give the team 5 or 6 decent innings, the Sox should have a good chance of winning this ballgame.

But once again, it all starts with getting hits in clutch situations.

It will be all hands on deck for the Red Sox following a tough Saturday night loss that was capitalized by a demoralizing Giancarlo Stanton go-ahead grand slam.

This game should not disappoint and will be a competitive contest, but Boston avoids the sweep and squeaks out a close victory in front of the home faithful.

If we take a looks at some trends, we can see that Under is 8-0 when the New York Yankees are on the road against teams that average 3.50 extra-base hits per game, but I don’t really give any worth to trends like this!

We recommend going against the trends here; bet on Red Sox to win and on over 10.5 runs!