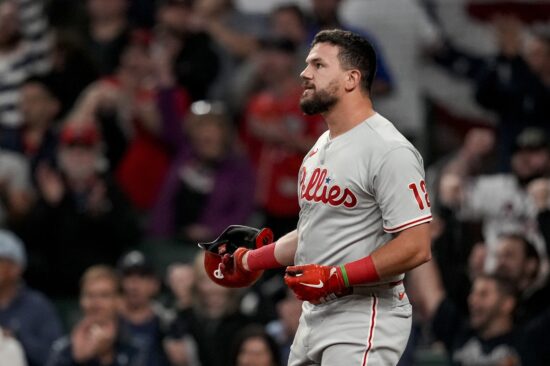 Both the San Diego Padres and the Philadelphia Phillies have the talent to make it to the World Series, but that doesn’t mean their respective appearances in the NLCS series preview aren’t a bit unexpected. The Phillies are in this spot despite having an interim manager in Rob Thomson (since signed to a 2-year extension) and despite an 11-14 September. San Diego mortgaged their future at the trade deadline to get to this spot and somehow got past the Dodgers in the NLDS despite being 5-14 against L.A. this season.

The Padres are -125 favorites in the series on the Vegas odds, with Philadelphia a +105 underdog. San Diego has the home field advantage here as they were two games better than the Phillies during the regular season. Philadelphia is making their first postseason appearance since 2011, while the Padres are here for the second time in the last three years. San Diego has made the World Series in 1994 and 1998 – both losses. The Phillies have made the World Series seven times, winning twice.

Padres Have Made the Moves to Get Here

Every move San Diego has made for a year now is to get them to this point. That started with firing manager Jayce Tingler last October and signing veteran Bob Melvin, an experienced clubhouse presence and 3X manager of the year.

The Padres were also the most active team at the trade deadline, bringing in Juan Soto, Josh Hader, Josh Bell, and Brandon Drury – who hit a grand slam on the first pitch he saw with the team. Those moves have helped the Padres get past multiple Cy Young winners Jacob deGrom, Max Scherzer and the Mets in the wild card round and then take down rival – and 111 win team – the Dodgers in the NLDS.

Phillies Have Star Power As Well

San Diego made a lot of their big moves at the trade deadline, but the Phillies were more active in the offseason. Philadelphia added Kyle Schwarber, Nick Castellanos, and Jeurys Familia (since DFA’d) to join Bryce Harper, Rhys Hoskins, J.T. Realmuto, Jean Segura, and company. When it wasn’t working at 22-29 under manager Joe Girardi, GM Dave Dombrowski cut ties and went with Rob Thomson who led the Philles to a 65-46 mark down the stretch.

Schwarber led the NL with 46 HRs while Hoskins added 30. Harper missed some extensive time this season with a thumb injury, but has gotten red hot in this postseason going 8-16 with 2 HRs in the series vs. the Braves.

Who Gets the NLCS Series Preview Pitching Edge?

While it’s great to talk about Soto, Manny Machado, Harper, and Schwarber ultimately postseason baseball comes down to pitching. Both staffs are pretty stacked and with a long 7-game series pitchers may be needed 2-3 times.

Yu Darvish will throw game 1 for the Padres, but he’s got a checkered postseason past which includes giving up 3 HRs to the Dodgers last Wednesday. Darvish is 4-5 with a 4.60 ERA in his playoff career, but San Diego also has former Cy Young award winner Blake Snell, Joe Musgrove who had a 2.93 ERA this season, and Mike Clevinger who the Phillies hit .128 against as a team.

The Padres have the bigger name starters in the NLCS series preview, but the Phillies have a pretty good staff themselves. Zack Wheeler has posted a sub 3.00 ERA the last three seasons, Aaron Nola hasn’t allowed a run in three starts in October, and Noah Syndergaard is healthy for the first time in three years.

The San Diego bullpen has a 2.19 ERA this postseason, impressive numbers up against the Mets and Dodgers. Hader had some struggles early, but has allowed just 1 hit in 4.1 IP in these playoffs. Philadelphia has a definite disadvantage when it comes to relievers.

Who Wins This Series?

The Padres are playing pretty carefree baseball, but they’ve also been underdogs in series’ against the Mets and Dodgers? Will the pressure get to San Diego here – especially when Philadelphia gets to play the ‘chip on our shoulder’ card? In a star-studded series, the real MVP is going to be 60-year-old manager Bob Melvin, who will keep the Padres calm and get them to the series win although it’s going to take all 7 games.