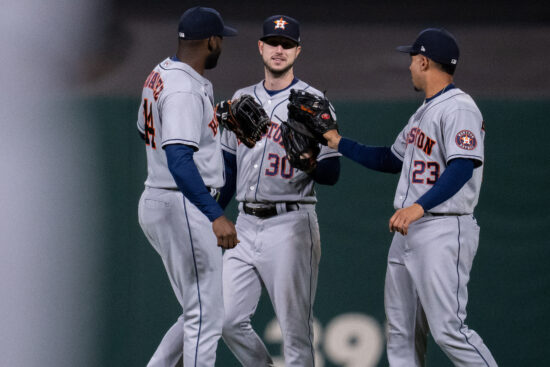 The Houston Astros and San Francisco Giants continue their weekend series Saturday afternoon at Oracle Park. Houston was able to take game 1 by the score of 9-6, cashing out as +112 underdogs for their third straight win. Oddsmakers are calling game 2 a toss-up however, listing both teams at -110.

Greinke and Houston the Play?

The Astros are 8-2 over their last 10 and are starting to pull away in the AL West, boasting a 5.5 game lead over Oakland. Houston has great value at -110 on Saturday as they are 10 games above .500 on the road and send Zack Greinke to the bump.

Greinke is 10-3 on the season with a 3,48 ERA. The right-hander has won 6 of his last 7 decisions and has only given up 4 ER total over his last three starts. Greinke loves pitching by the Bay too, going 6-0 with a microscopic 1.19 ERA in 8 starts at Oracle Park. It makes you wonder why the Astros aren’t huge favorites in this matchup?

The Astros offense is pretty solid as well, scoring 36 runs over their last four outings. Jose Altuve had a couple of HRs and combined with Michael Brantley the top of the Astros order was 6-11 in Friday’s win. Brantley, Altuve, and Carlos Correa are all hitting better than .375 over the past week.

San Francisco sits atop the NL West with a 3 game lead over the Dodgers. The Giants still bolstered their team by trading for Kris Bryant at Friday’s trade deadline. Bryant, the versatile 3B/OF coming over from the Cubs, is expected to make his team debut on Saturday afternoon.

The Giants need a boost even though they just took 2 of 3 in a series from division rival Los Angeles. SF is just 3-4 on their current home stand and have a very tough matchup against Greinke on Saturday. Mike Yastrzemski has gone 4-6 in his career vs. the Houston starter, but Brandon Crawford has the team’s lone HR over 146 combined ABs vs. Greinke

Alex Wood goes for the Giants, hoping to continue a run of strong starts as of late. The left-hander has allowed 2 ER or less in 4 of his last 5 starts, but the Astros are 11-4 in their last 15 vs. a Southpaw starter.

The line on this game does raise a bit of a red flag as Houston has been a -180 favorite or higher in 5 of Greinke’s last 7 starts. This would seem like an opportune spot to pile on the Astros, but oddsmakers never make it that easy. Giants in a contrarian play at home built on the electricity of adding Bryant to their lineup.