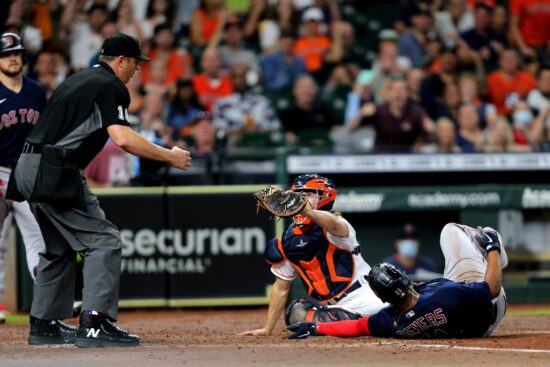 Two American League teams fighting to get to the top spot in their respective divisions will battle it out on Tuesday as the Houston Astros (33-26) take on the Boston Red Sox (37-23). This will be a three-game set between the two teams.

Last week, these two teams played in Houston, with the Astros winning three of the four games. The Astros outscored Boston 19-9 in that series.

Over the weekend, Houston took two of three from the Toronto Blue Jays. In their last game, a 6-3 win on Sunday, Jose Altuve hit his ninth home run of the season while Chas McCormick hit his fifth. Houston enjoyed a day off on Monday.

Coming into this series, Boston has now won five games in a row. Over the weekend, they were able to sweep the rival New York Yankees, while Monday, they won a makeup game against the Miami Marlins, 5-3.

Just a single game back in the division, the Astros will look to continue to put pressure on the Oakland Athletics by taking care of Boston on Tuesday.

To do so, they will look to southpaw Framber Valdez (1-0, 1.64 ERA) to lead the way. Valdez will be making just his third start of the season since fracturing his left ring finger back in spring training.

In his last start, a 2-1 win over Boston, Valdez went seven innings allowing one run and striking out 10.

Offensively, Jose Altuve and Carlos Correa have been Houston’s strongest hitters over the last week. In that span, Altuve is hitting .286/.429/.571 with two home runs and four runs batted in.

Not to be outdone, Correa is hitting .286/.375/.619 with two home runs and five runs batted in over the last week. Correa has also had success in his career against Boston starter Martin Perez. In 11 at-bats, he is hitting .273 with a home run and three runs batted in.

Since losing the first three games of the series against Houston last week, the Red Sox have been on an absolute tear and hope to repay the favor to Houston as they host them this week.

On the mound for the Red Sox will be lefty Martin Perez (4-2, 3.09 ERA). Perez picked up the lone win against Houston in last week’s series. In the 5-1 victory, Perez went 7.2 scoreless innings, allowing six hits and striking out four.

Against Framber Valdez, Kike Hernandez has taken him deep once, while Devers (two for four) and Christian Arroyo (two for three) have a couple of hits apiece against him.

Who wins the Astros vs. Red Sox game tonight:

This is an interesting matchup from a pitching standpoint. Both Framber Valdez and Martin Perez were masterful in the last series between these two.

Still, something has to give, and with both starters capable of pitching well, it could boil down to the bullpens. In this case, the Red Sox have the advantage when it gets to the pen. It could be a close one, but take the Red Sox to win.