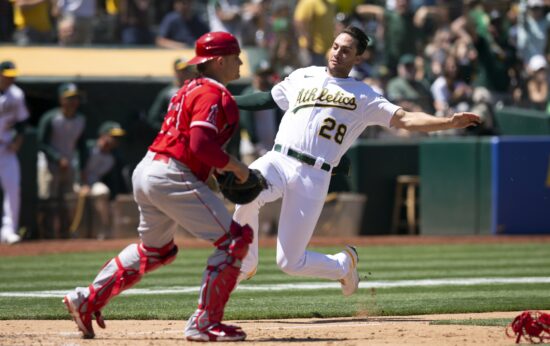 The Oakland Athletics and the Los Angeles Angels will be kicking off their weekend four-game series starting Thursday Night when the Athletics are in town in Anaheim.

The Oakland Athletics come into Thursday’s matchup, having split a two-game series with the cross-league foe, the San Diego Padres. They dropped the first game of the series 7-4 but bounced back last night for a 10-4 victory thanks to a three-run seventh inning.

The Athletics are doing their best to keep up with the Houston Astros in the AL West, but the Astros have not come to play around this season. The Athletics are 57-46, 11 games over .500, yet still six games back of Houston.

The Angels are coming off a hard-fought series win over the Colorado Rockies in a series where they won two of three at home. The Angels won the third and final game of the series in a nail-biter affair last night in which they won 8-7. Shohei Ohtani once again made a huge impact, this time by giving the Angels the lead in the bottom of the fourth inning with an absolute hammer for his 37th home run of the season.

The Angels are now one game 51-50 on the season, one game over .500, but they still sit 11 games back of the division-leading Houston Astros in the AL West.

In the two teams’ previous matchups this season, the Athletics hold the strong advantage, having won 9 of 12 games this season. They have been able to contain this Angels offense to the tune of them only allowing 2.9 runs per game to them all season.

While they have been playing stellar defense behind their consistent pitching staff, their positional players have also brought the run-scoring in this season’s series. The Athletics lineup has scored 5.1 runs per game against the Angels this season, making the run differential between the two a full 2.2 runs on the season series.

Key Players for the Athletics

Getting the call on the mound for the Athletics in tonight’s primetime matchup will be righty Frankie Montas. He has secured 16 decisions on the season, going 8-8, and has posted an ERA nearing the low fours at 4.34. This will mark his 21st start of the season and will add to his total of 112 innings pitched. In those innings, he has allowed 113 hits but struck out 122 batters.

The offense was not an issue for the Athletics last night, and they will hope for that to continue in this game versus their AL West foe.

Newly acquired Starling Marte is not likely to make his first appearance for the Athletics in this game after being acquired from Miami last night, but he will add a huge boost to this team in the outfield.

Stepping up for them last night was their usual stars in third baseman Matt Chapman and shortstop Elvis Andrus. Andrus tallied three hits in four at-bats on the way to two RBIs in the game. Chapman also recorded three hits but had a third RBI to his name.

Key Players for the Angels

Getting the starting nod for the Indians will be the right-hander Dylan Bundy, who has not been very productive this season. He has only recorded one win for the Angels to go, with seven losses in eighteen appearances and fourteen starts. He boasts a putrid 6.69 ERA and has a WHIP of 1.414 in 70 innings pitched.

The Athletics have the clear advantage in tonight’s pitching matchup with how awful Bundy has been, so the Angels may be looking for big production out of their key lineup players, one of them obviously being Shohei Ohtani.

His talent was on full display last night when he secured two walks, two hits, a moonshot homer, and three RBIs in five total plate appearances in the game. That home run made it 37 on the magical season for Ohtani, where he is starting to cement himself as the clear AL MVP favorite.

His runs batted in were almost matched by Justin Upton, who also homered in the game. That homer made it 15 on the season for the veteran outfielder who was selected in the first round of the 2005 MLB Draft. He also has 34 RBIs on the season and has maintained some defensive strengths into his later years.

Who wins the Athletics vs Angels game tonight:

In a game where the pitching matchup is not enticing in the slightest, these two teams are going to be swinging to rip the seams out of the ball, but the Athletics should have the advantage. They have a bit more to fight for being closer in the division race and having more of a control on the AL Wild Card. Both teams are trying to remain tight in their respective division races and the AL Wild Card, but the Athletics have more of a shot.

I have no confidence in Dylan Bundy at the mound for the Angels. He has surrendered too many walks and hits per nine innings, and aside from his one win, he has not produced many strong starts.

With the new addition of Starling Marte to go along with a lineup that features consistency all throughout, the Athletics are positioned to make a good push in the AL Wild Card race and may have a shot in the AL West if the Astros are caught slipping. They are, however, 4-6 in their last ten, which is a bit concerning.

The Athletics have had their way with the Angels thus far this season, and I don’t see any reason why that would change today.