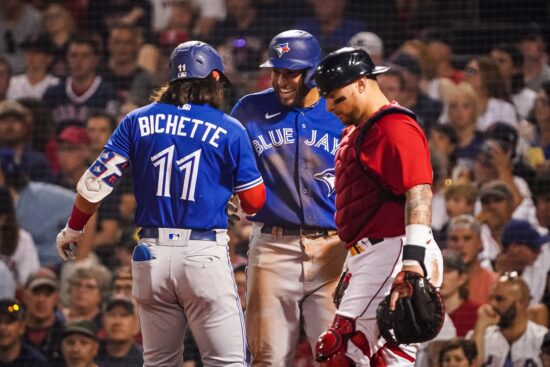 The Toronto Blue Jays and Boston Red Sox are set for a doubleheader today, as Tuesday night’s game was postponed due to rain. On Monday, the Sox prevailed in a thriller over the Blue Jays thanks to Alex Verdugo’s go-ahead homer in the 8th inning. The Jays are now only two games over .500 and are more than four games back of a Wild Card spot, while Boston sits atop first in the AL East. Here’s the preview for the second game of Wednesday’s doubleheader.

In the offseason, the Blue Jays made an absolute splash, acquiring Marcus Semien and George Springer. Semien was named the starting second baseman at this year’s All-Star Game and is currently hitting .275/.343/.527 along with an impressive 24 homers.

Springer has been out of the lineup, for the most part, thanks to lower-body injuries, but is currently hitting leadoff for Toronto with an OPS+ of 126 in 30 games. The Jays also have studs in Vladimir Guerrero Jr, Bo Bichette, and Teoscar Hernandez. All three were All-Stars at the 2021 Midsummer Classic. As a team, the Jays average the second-most runs in all of baseball.

Pitching-wise, Steven Matz has come into the Blue Jays rotation and done a satisfactory job. After starting the season on fire, he’s come back down to earth with an ERA+ of 103 in 87 innings of work. Matz last faced the Red Sox on June 12, allowing only one run over 5.2 innings of work, striking out eight.

After a god awful 2020 season following the much-scrutinized Mookie Betts trade, the Red Sox are back to being one of the elite teams in the American League. This has come as a shock to everyone like myself, who thought the Rays or Yankees would be winning the AL East.

Boston is 7-3 over their last 10 games and the second-best team slugging percentage in baseball. Pitching-wise, their mediocre staff is somehow holding down the fort, with names like Matt Barnes pitching exceptionally well in the pen.

Third baseman Rafael Devers will certainly get MVP votes by the season’s end, as he currently leads the league in RBI’s with 81.

I think the fact that this is a condensed seven-inning game really favors the Blue Jays. Matz is a more proven pitcher than 25-year-old Tanner Houck, and the Jays struggling bullpen will only be expected to pitch one or two innings in this one. The Jays are desperate for a win to keep themselves within distance of a Wild Card spot and look for their offense to put runs up early on Wednesday evening.