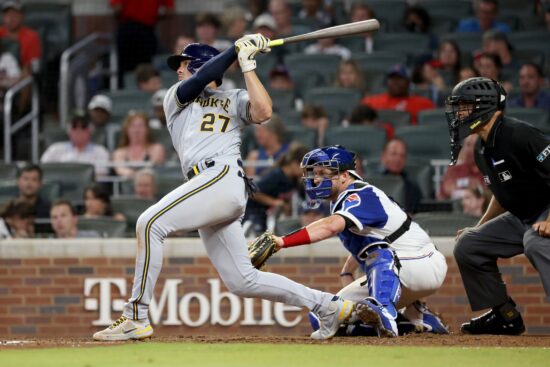 The Milwaukee Brewers and the Atlanta Braves will be meeting for Game 2 of their weekend three-game series on Saturday when the Brewers make their second appearance at the Braves at SunTrust Park.

The Milwaukee Brewers came into this series matchup having made easy work of one of the worst teams in baseball earlier this week when they swept the Pittsburgh Pirates. They outscored the Pirates by 25 runs over the three-game series and kept them completely off the board in two of three.

The Brewers are now 62-42, a full 20 games over .500, and they have won seven of their last ten games. After their recent runs, they are starting to look like a serious contender with the Giants, Dodgers, and Padres in the National League.

Meanwhile, the Braves continue to tread water, as they now sit at 51-53, which in most divisions would not be great, but in a struggling NL East, they are only four games back. They continue to play .500 baseball like they have all year, winning exactly five of their last ten.

Losing Ronald Acuña Jr. right before the All-Star break really halted the Braves’ chances of making a run, but with how the rest of the division has performed, they are still in the race.

Coming into this series, the Braves split a four-game series with the NL East-leading New York Mets. They won their games by larger margins and by scoring runs, but when they lost, they were nearly shut out by a strong New York pitching staff. That series showed a lot of the inconsistencies that are present on this Braves team.

In what should be the case, the better and more consistent team got the victory in last night’s affair between these two teams, and that was the Milwaukee Brewers.

The Braves m brought home four early runs in the first inning and were able to get to the Brewers starter, Corbin Burnes. Austin Riley got it started with a two-run homer, then newly acquired Adam Duvall got his first RBI in a Braves uniform, and Stephen Vogt added another.

But the Brewers came roaring back, scoring four runs in both the third and fourth innings to take a commanding 8-4 lead that would stretch to a 9-5 game by the time the night was over. Avisail Garcia had 3 RBIs and three hits in last night’s contest to go along with three hits from second baseman Kolten Wong.

Key Players for the Brewers

Getting the call on the mound for the Brewers in tonight’s primetime matchup will be their ace, righty Brandon Woodruff. He has been absolutely stellar this season with a 2.14 ERA, but he has only been able to get seven wins on his record while recording five losses. The two-time MLB All-Star will be making his 21st start of the season and will add to his total of 126 innings pitched. In those innings, he has given up 75 hits and struck out 146 batters, one of the highest totals in the league.

If Brandon Woodruff was not in the NL, he could be a close favorite for the Cy Young. But with superstar pitchers such as Jacob deGrom and Walker Buehler at the top of the assumed voting, Woodruff becomes an afterthought.

Right fielder Avisail Garcia has led the way in the offensive end for the Brewers all season. He has 18 home runs and 63 RBIs, both of which lead the team. Star left fielder Christian Yelich remains injured, but he has struggled to make an impact in games when he is playing.

Shortstop Willy Adames and third baseman Luis Garcia also add a nice depth to this lineup. They both have over 12 homers and 40 RBIs

Key Players for the Braves

Getting the starting nod for the Braves will be left-handed Kyle Muller, who continues to show why he deserves to be featured in this Braves rotation. The 6 feet 7 inch tall rookie has been great for the Braves in five starts and 24 innings of play. He boasts a great ERA of 2.55, has allowed only 15 hits, and has struck out 26 batters.

His last start saw him go five shutout innings, only allowing four hits while striking out three versus the Mets.

The Braves have one of the most inconsistent offensive lineups in the league, but the addition of Adam Duvall gives this outfield another bat after the incidents that took away Marcel Ozuna from the lineup and Ronald Acuña Jr.

The team exploded for four runs early in last night’s game, only to be kept quiet for the most part for the remainder of the game.

In a similar showing of inconsistency, in their series against the Mets they scored six and twelve runs in two of the games but also scored one and zero in the other two.

The pitching matchup could not be much better in a matchup between these two teams. However, it is a matchup of a multiple-time All-Star and a Cy Young contender versus an inexperienced rookie who has shown his potential.

These two teams are both still fighting hard in games this season as the Braves decided to keep their veterans and bulk up with talent to try to make a run. The Brewers made some huge deadline moves, acquiring All-Star Eduardo Escobar from the D-Backs and relief pitching in the way of Daniel Norris and John Curtiss. They have a secure lead in the NL Central, and their current lineup and pitching have got them this far, but adding these weapons puts them over the top.

Escobar comes in and is the instant stat leader in the lineup in two of the major hitting categories (RBIs and Home Runs) and brings some huge power to this lineup that I think will be a factor in tonight’s contest.

Woodruff has not done anything this season to convince me to bet against him or fade him in this matchup. He has been solid as a rock this season for the Brewers Crew.

On the other hand, while Kyle Muller has been awesome so far for the Braves, the game usually catches up to rookies, especially pitchers, when we get deep into the season.

Woodruff’s experience and veteran play will give the Brew Crew the edge in this matchup.