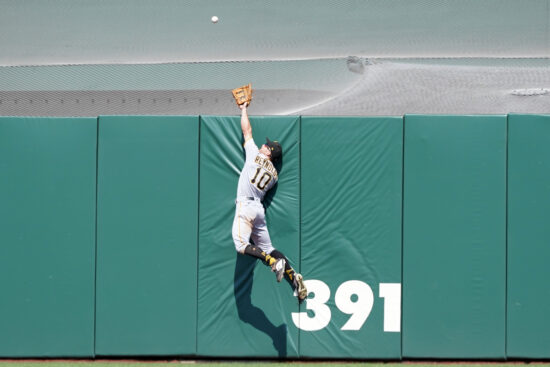 It’s a battle of 1st place vs. last place when the Milwaukee Brewers meet up with the Pittsburgh Pirates. The Brewers come into Tuesday’s contest with an 8 game lead in the Central, while the Pirates are just waiting to see if they can move any more pieces ahead of Friday’s trade deadline. Despite what looks like a relatively easy Brewers win, Milwaukee is just a -123 favorite in this tilt.

Brewers Taking to the Road

Milwaukee just wrapped up a 5-game home stand where they went just 2-3. That includes dropping two to the Royals but also taking 2 of 3 from fellow 1st place team the White Sox over the weekend. Now the Brewers head out on the road where they are 3-0 since the all-star break earning a sweep in Cincinnati while scoring 26 runs June 16th – 18th.

The Brewers are coming into Tuesday’s contest off a loss, falling 3-1 to the White Sox on Sunday while being held in check to just 1 ER over 6.0 IP from Chicago starter Lance Lynn. Who knows if there will be much better production vs. Pittsburgh starter Tyler Anderson, the left-hander that pitched 7.0 scoreless vs. the Brewers on July 4th.

Milwaukee burned up their top starters in the White Sox series, with Freddy Peralta, Corbin Burnes, and Brandon Woodruff all taking the bump over the weekend. That puts Brett Anderson on the mound for this series opener, but he’s been solid too with 2 ER or less allowed in 3 of his last 4. The thing about Anderson is that he doesn’t go very deep, pitching out of the 5th just once in his last 10 starts.

Pirates Back From West Coast

Pittsburgh is back home after getting swept in Arizona but then taking 2 of 3 from 1st place San Francisco over the weekend. The Pirates won the first two games of the series against the Giants as +180 and +251 underdogs while plating 16 runs in the victories. The Bucs did drop the series finale 6-1 on Sunday however.

Pittsburgh has faced Brett Anderson once this season, failing to score a run over 7.0 IP way back in April. The Bucs hit just .125 collectively as a team vs. the Milwaukee starter, going a combined 4-32. The good news for Pirates backers is that the Brewers hit just .194 (6-31) vs. Pirates starter Tyler Anderson.

Tyler Anderson had one of his better outings of the year vs. the Brewers on the 4th of July, allowing just 3 hits in a 2-0 Pirates win as +167 underdogs.

The fact that the Brewers are just -123 favorites raises a big red flag in this one, as the Pirates trail Milwaukee by 19.5 games in the division. Have to go with Pittsburgh in what looks like a trap game.