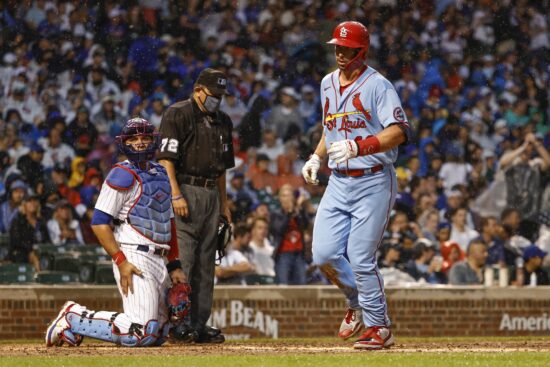 One of the great rivalries in all of sports is renewed on Monday night as the St. Louis Cardinals host the Chicago Cubs. Both teams will look to break the tie for third place in the NL Central in their favor this week. To do that, the Cubs and Cardinals will need to overcome the fact that their offenses haven’t been able to keep up with the number of runs they have allowed.

The Chicago Cubs won the first series of the second half of their season, taking two of three from the Arizona Diamondbacks. They enter this game off a loss in the final game of that series, as the Cubs failed to earn the sweep against the worst team in Major League Baseball this year. Now, the Cubs aim to win a second straight series against a much tougher opponent in the rival Cardinals.

If the Cubs are going to win this series opener, they are going to have to overcome one of the worse road records in the league. Chicago has won just 18 games away from home on the season, putting them in the bottom half of the league in that category. But if Kris Bryant and Javier Baez can continue to produce offensively, the Cubs should at least have a shot to add to their less than stellar road record.

Right now, the St. Louis Cardinals and Chicago Cubs find themselves a considerable distance behind the teams in the Wild Card spots in the National League. But the Cardinals can continue to move in the right direction with a strong start against the Cubs on Monday. To achieve that, St. Louis is relying on an unproven pitcher in Jake Woodford to put them in a position to win against their top rival.

Woodford has pitched just 25.1 innings this season and has an ERA of 4.62. Thanks to the unimpressive pitching from Cubs starter Alec Mills, Woodford doesn’t have the worst ERA among this game’s starters. If he can just avoid giving up the big inning early in this game, the Cardinals will at least have a chance to come out on top.

While both of these teams won their first series coming out of the All-Star break, the Cardinals did so against a much tougher opponent in the San Francisco Giants. Expect the Cardinals to take advantage of being at home and for the Cards to win game one of this significant series in the National League.