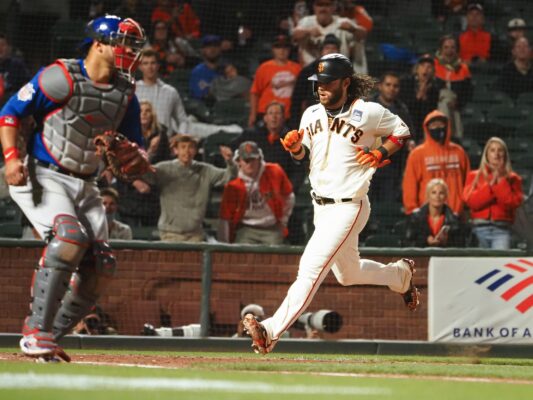 The Chicago Cubs maintain their one-and-a-half-game lead in the NL Central thanks to the St. Louis Cardinals dropping their series opener to the Cincinnati Reds. The Giants stayed a game ahead of the Padres and two games ahead of the Dodgers after the win.

Anthony DeScalafani had another quality start going six innings allowing only four hits and two earned runs while not allowing a walk. Brandon Crawford hit a three-run homer in the fifth inning, which proved to be more than enough for San Francisco.

When May started, the Cubs were five games out of first place, and the discussion was what kind of return you could get for Kris Bryant, Anthony Rizzo, Javier Bryant, and Craig Kimbrel at the trade deadline. That has now all changed with Chicago winning 9 of 11 and sitting in first place in a very winnable NL Central.

The Cubs have a top ten offense despite a number of injuries throughout the season. One of the big reasons has been the return of MVP-caliber play from pending free agent Bryant. Bryant leads the team with an OPS of .991 and has hit 16 doubles and 12 home runs.

This San Francisco team was not supposed to be a playoff contender. Combine that with having to play in the same division with the Padres and Dodgers, and it looked like a rebuilding year for the Giants.

San Francisco started the season red-hot, but all of us expected it to end, and the Padres and Dodgers would be in first place soon enough. Unfortunately, that has not been the case, and the Giants run differential of +67 says that this team is for real.

The Giants have not named a starter for tonight’s game. However, the pitching staff has been solid all season and ranks top ten in every important category.

The offense has been even more of a surprise, ranking in the top ten in most categories themselves. They have combined for an OPS of .732. Crawford has had a resurgence, leading the team with an OPS of .873.

Arrieta has dominated the Giants in the past. He has held them to an OPS of .478 in 94 plate appearances.

There has not been a line posted since the Giants have not announced a starting pitcher.

This game should be around a pick’em with both teams being -110 or so. However, with Arrieta’s success against the Giants and a Cubs team that is playing at a high level, I like Chicago to bounce back and even the series.