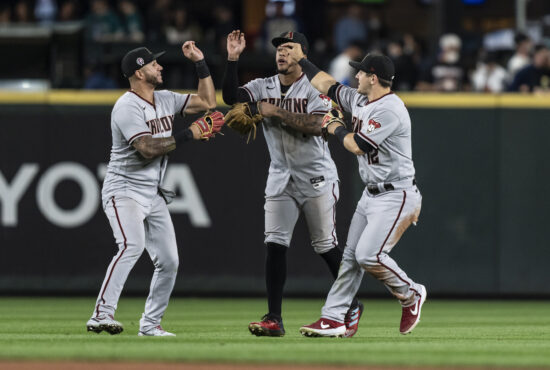 The Seattle Mariners didn’t get the sweep they had hoped for this weekend, but now they have to shift their focus to just taking the series from the last-place Arizona Diamondbacks. Arizona was able to get a rare road win on Saturday, cruising to a 7-3 win as +157 underdogs. The loss puts Seattle to 2 back in the AL wild-card race as the Yankees and Blue Jays both won on Saturday. The Mariners are -190 favorites to close this thing out with a win.

Arizona Good With the One Win?

The Diamondbacks are an MLB worst 18-53 on the road this season but didn’t look it as Daulton Varsho powered them to a 7-3 win thanks to his 3-4, 4 RBI night from the #9 spot in the batting order. Arizona still hasn’t won a road series since taking 2 of 3 in Atlanta at the end of April – any reason to think they get one here?

Arizona is a +158 underdog on Sunday, and to be fair they had their chances in Friday’s 5-4 loss as well (+137). Seattle starter Yusei Kikuchi has been either great – or horrible – over the past five weeks so maybe the D’Backs bats can get going again? There are some things to be optimistic about too. Varsho is hitting .400 over his past four games, and Seth Beer has gone 2 for 4 with 3 runs scored, 2 RBI, and a HR in his first two MLB contests.

Tyler Gilbert (1-2, 3.12 ERA) makes his 6th MLB start on Sunday. That run started off with a bang throwing a no-hitter against the Padres in his first MLB start on August 14th, and he’s been rookie-like since then with 12 ER allowed over his last 22 IP (4.91 ERA). One outing was 4 ER allowed over 5.0 IP at Coors Field so that’s a wash, and Gilbert gave up 3 over 7 innings in his most recent start against these Mariners last Sunday.

Of course, Seattle still has to win on Sunday, but the opportunity for the sweep was there until the 7-3 loss on Saturday night as -171 favorites. The Mariners just took all three from Arizona last weekend while scoring a total of 24 runs, and they were back home after dropping two of three from Houston and pulling to within a game of the 2nd AL wild-card spot.

It’s best to not dwell on that loss too long though, because the Diamondbacks offense may have to be sharp on Sunday. They managed 3 ER against Gilbert last Sunday, but the Arizona lefty pitched well going 7 innings. Seattle won that game 10-4, but that’s a little misleading thanks to a 7-run 11th inning.

The reason Arizona might need an offensive outburst is because they don’t know what they’re getting with Yusei Kikuchi (7-8, 4.32 ERA) on the hill. For example over his last two starts he’s thrown 7.0 IP of shutout ball and then followed that up going 1.2 IP giving up 4 ER while walking four – both against the Astros. Kikuchi has allowed 15 ER over his last four starts, and that’s including the 0 ER outing.

There’s no value on the Mariners at -190 with Kikuchi on the hill, as he’s allowed 4+ ER in three of his last four starts. Gilbert tossed 7 strong against Seattle in his last start, and the Diamondbacks have brought up some young players like Beer and Henry Ramos who are hungry for a road series win.