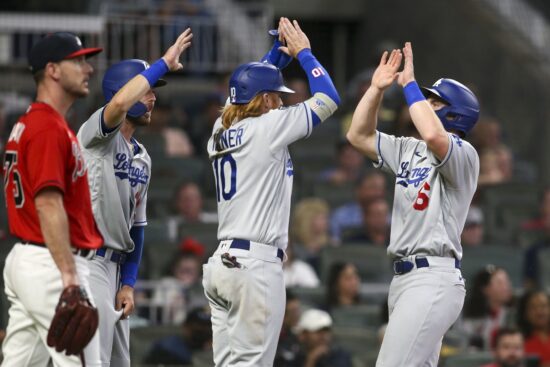 The Los Angeles Dodgers out-slugged the Atlanta Braves 9-5 during the first game of their three-game series. The two teams are set to meet again Saturday night in Atlanta in a rematch of last year’s memorable NLCS.

The Braves continue to struggle to find any semblance of consistency this season. Since a poor start during the first weekend of the season, Atlanta has climbed back to .500 a few times but have never been able to get over the hump. They got back to .500 in late May but have lost five of seven games since then, dropping them three games under .500 and 3.5 games behind the Mets in the NL East.

It’s been a somewhat similar situation with the Dodgers, but instead of staying above .500, Los Angeles is trying to get ahead of the Padres and Giants in the NL West. Coming off a recent eight-game winning streak, the Dodgers have gone 4-5 over their last nine games. Despite having the third-most wins in the National League, they are still third in the NL West, two games off the pace.

Professor Morton to the Mound

The Braves will send Charlie Morton to the mound on Saturday night. The 37-year-old is an important figure in the Atlanta rotation but is putting together a rather modest season, going 4-2 with a 4.26 ERA over 11 starts. However, things are moving in the right direction, with Morton giving up three runs or less in four straight starts and the Braves going 3-1 in those starts.

Of course, Morton will have to face a Los Angeles lineup that has scored 23 runs over its last two games. Cody Bellinger still isn’t producing much, but his presence in the lineup is important to the Dodgers. Meanwhile, Mookie Betts is finally starting to heat up while Albert Pujols and Max Muncy provide power.

The Wizard of Dodger Town

Morton and the Braves will be opposed by Clayton Kershaw, who already has seven wins in his first 12 starts of the season. Of course, Kershaw hasn’t been overly dominant this year, posting a 3.33 ERA, which is modest by his standards. He’s also given up five runs twice in his last four starts, so he’s been a little vulnerable lately.

But while the Atlanta lineup has plenty of power, the Braves have been inconsistent all year. Ronald Acuna and Austin Riley have produced all year while everyone else has been hot and cold. Ozzie Albies has been heating up alongside Acuna lately, but everyone else has struggled with the Braves going 2-5 over their last seven games.

With the way the Dodgers have been hitting over the past two days, it’d be foolish to bet against them. If Morton were having a better year, there might be an argument that he could slow them down. However, the Dodgers have the more reliable lineup and the better starting pitcher in this game.