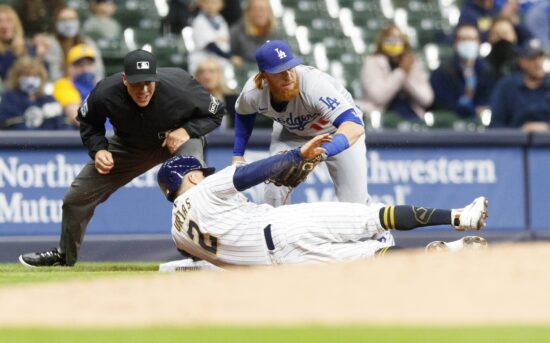 The Dodgers will look to salvage at least a split of the series after the Brewers took the first two games. Freddy Peralta was outstanding, going six innings allowing only one hit, and AJ Pollock homer in the victory. Jackie Bradley Jr. hit his second home run of the season in the win.

It should be another low-scoring contest as both teams send outstanding pitchers to the mound. Dustin May (1-1, 2.53 ERA) and Brandon Woodruff (2-0, 1.55 ERA) have both been two of the games best this season.

After looking nearly unstoppable to start the season, the Dodgers have gone ice cold. It is hard to believe a team with this much talent has lost 9 of 12 games. Los Angeles has averaged just over 3 runs a game during the skid.

May should give them a good chance of winning the game even without an offensive outburst. He has 21 ⅓ innings allowing 15 hits, 5 walks, and only 6 earned runs. He has a WHIP of 0.94 and has stuck out 32.

Justin Turner continues to be the best offensive player for Los Angeles. He has an OPS of 1.005 to lead the team with 7 doubles and 6 home runs.

Los Angeles has had very little experience against Woodruff. In 14 plate appearances, they have combined for an OPS of .721. Corey Seager is 2 for 3 with 2 doubles off of Woodruff.

Milwaukee’s hot stretch has put them two games ahead of the St. Louis Cardinals in the NL Central. The Brewers are 7-3 in their last 10 games.

Woodruff has put his name in the early contenders for the Cy Young award. He has thrown 29 innings allowing only 13 hits and walking 8 while giving up only 5 earned runs. Woodruff has a WHIP of 0.72, has struck out 34, and has not surrendered a homer.

The Dodgers are a small favorite at -125. While May has been really good to start the season, Woodruff has been even better. This number does not add up to me, and I thought it should be reversed. I think there is solid value on the Brewers +105.

I really like the under 7 as well. Both these starting pitchers should give you 6 quality innings, and neither offense scares you. I have a play on the Brewers +105 and the under 7.