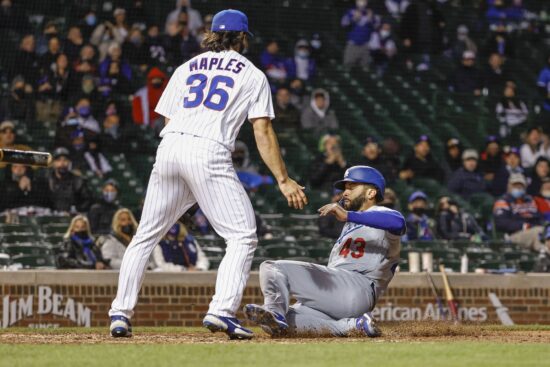 A miserable road trip continues for the Los Angeles Dodgers, as they were swept in a double header on Tuesday for their 5th loss in the last six games. The Chicago Cubs have momentum, winners of three of their last four to climb out of the basement in the NL Central. The Cubs have to do some pitching rearranging though, and thus are +155 home underdogs on Wednesday (LAD -175).

Dodgers in a Big Rut

L.A would seem to have the pitching edge on Wednesday with Walker Buehler (1-0, 3.16 ERA) on the hill. That’s what they had to have though on Tuesday too though, but losing Clayton Kershaw and Trevor Bauer starts in the double-header at Wrigley Field.

Buehler looks to salvage a win in this series, coming off a 10 K performance but in a game that he allowed 5ER in a 6-5 loss at home to the Reds. Buehler had allowed 2 ER or less in three of his first four starts of the year, so perhaps the game against Cincinnati was just a once-off.

No matter how good Buehler pitches on Wednesday, the Dodgers should really start scoring some runs. The team has big game potential as evidenced by Sunday’s 16-4 win over the Brewers, but then put up just 4 total in the double header on Tuesday? LAD managed just 2 hits over 3.2 IP in the nightcap against Cubs pitcher Keegan Thompson, who was making his first career start.

Cubs Building on Something

Chicago was in last place in the Central just last week, but they’ve managed to climb their way into 3rd thanks to wins in three of their last four. The Cubs offense knocked Kershaw out in the 1st inning of the opener, cruising to a 7-1 win. Chicago also eked out a 4-3 walk-off win to complete the sweep.

Adbert Alzolay steps in to start for Jake Arrieta (thumb) in this one, and there are some that would say this gives Chicago a better chance to win. Alzolay reached a career high in pitches and innings in his last start, and has allowed 2 ER in each of his last two outings.

No Dodgers players have ever faced Alzolay, and the Cubs are just 11-51 (.216) against Buehler. Kris Bryant has gone 3-6 in his career vs. the L.A starter, and is on fire the past week hitting .407 with 3 HRs. David Bote led the way with 4 RBI during the double-header outing on Tuesday.

-175 seems like a very hefty price to pay for a Dodgers team that is struggling as of late. There’s a very good chance they salvage the series with Buehler on the mound, but Chicago at +155 has more value in this spot. Either way, it should be a solid pitching matchup and that’s the way to lean in this one.