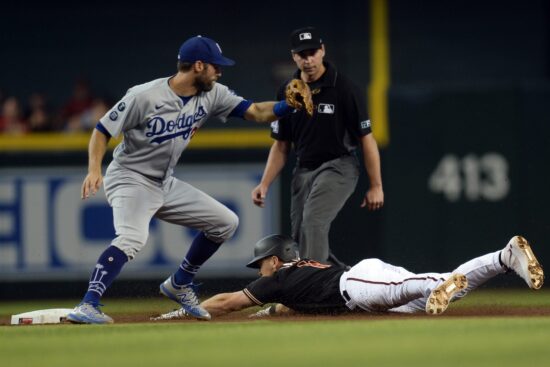 The Los Angeles Dodgers and the Arizona Diamondbacks will be meeting for the third and final game of their weekend three-game series on Sunday when the Dodgers make their third appearance at the Diamondbacks at Chase Field.

This game is essentially a home game for the Dodgers. Nobody roots for the Diamondbacks at this point, and the Dodgers are one of the most popular teams in baseball.

The Dodgers will try to avoid what would be an embarrassing series loss versus the Diamondbacks after all the momentum they are riding high off of from this week’s trade deadline.

The Dodgers made some huge deals where they were able to acquire three different All-Stars in the form of three-time Cy Young winner Max Scherzer and speedy shortstop Trea Turner from the Nationals, as well as the consistent ace for the Kansas City Royals, Danny Duffy.

The Dodgers came into this series matchup having lost three of four versus the best team in baseball by record, NL West rival, the San Francisco Giants. The Dodgers have been on the Giants’ tail for the entire season and will continue to battle with them for the NL West pennant.

Meanwhile, the Diamondbacks could not be doing any worse, it seems. With a record of 33-72, it does not get much worse for this team that has no real bright spots. If they had one bright spot, it was third baseman Eduardo Escobar, but with no hopes for the remainder of the season, the Diamondbacks shipped him up to the Milwaukee Brewers at the deadline.

Coming into this series, the Diamondbacks split a two-game series with the equally bad Texas Rangers.

In what should’ve been an easy series sweep for the Dodgers, the Diamondbacks were able to steal the first game of the series when they won 6-5 on a night where Tony Gonsolin got the start for the Dodgers.

The best team in LA bounced back last night with an 8-3 victory in Game 2 after a four-run seventh inning extended their lead.

In the season series between these two teams, the Los Angeles Dodgers have been dominant. Flashback to a few weeks ago, and you would have seen the Dodgers hit 8 home runs and score 24 runs against the Diamondbacks in an absolute stomping.

Key Players for the Dodgers

Getting the call on the mound for the Dodgers in today’s matinee matchup will be their always reliable lefty, Julio Urias. He has been great this season with a 3.54 ERA, and the Dodgers seem to win when he is on the mound, as he has a record of 12 wins and 3 losses. He will be making his 22nd start of the season and will add to his total of 124.2 innings pitched. In those innings, he has given up 107 hits and struck out 132 batters.

On offense, there are too many players at this point to name that can make an impact. The team is loaded with All-Stars and former MVPs. Cody Bellinger and Corey Seager are finally healthy at the same time, and the Dodgers still have the former MVP, Mookie Betts, who can still do his thing.

The team has not revealed when shortstop Trea Turner will make his debut, but you can imagine that adding his type of speed, contact, and power to the lineup will all but benefit the Dodgers.

Key Players for the Diamondbacks

Getting the starting nod for the Diamondbacks will be left-handed Caleb Smith. He boasts a sub-par ERA of 4.61. However, he has allowed only 69 hits and has struck out 96 batters over 84 innings, which make out to be pretty strong numbers.

After unloading Eduardo Escobar, the Diamondbacks have one of the most unimpactful and less enticing offensive lineups in the league.

The team scored six runs in game one of this series when Asdrubal Cabrera hit a walk-off RBI double, but they would only score three runs last night.

With Escobar gone from the desert, the Diamondbacks have no one in their projected lineup who has more than 10 homers on the season, and only David Peralta has over 40 RBIs. This team is not good offensively.

The pitching matchup would seem to favor the Dodgers in this one, but the real telling piece of evidence to help you make your pick in this game is the lopsided advantage the Dodgers have in their offensive lineup.

These two teams are going in opposite directions at this point in the season. The Diamondbacks unloaded their best talent at the deadline, and the Dodgers scooped up as many former All-Stars as they could.

Escobar’s departure gives me no faith in the Diamondbacks’ ability to score. Now, factor in that they will be going up against a very solid pitcher in Julio Urias. I have even less confidence in them.

The Dodgers lineup is almost at full strength, but their projected lineups will definitely be enough to give Urias the run support he needs versus Diamondbacks pitcher Caleb Smith, and the Dodgers should cruise to an easy victory in this one.