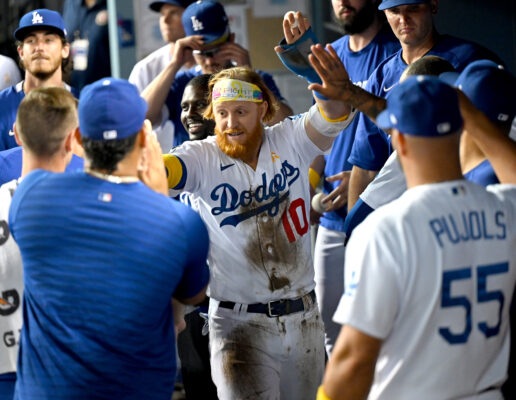 Many people figured it was only a matter of time before the San Francisco Giants relinquished their hold on 1st place in the NL West. That moment came in the past week when the Los Angeles Dodgers have used a 16-3 run over their last 19 to move into a tie with SF atop the division. The two teams meet up for a crucial series in the Bay this weekend.

It seems like the rest of the MLB’s fears are starting to come true as the Dodgers are slowly but surely getting healthier, and finding their chemistry in what they hope can be a World Series repeat. Los Angeles has picked up a sweep over the rival Padres in San Diego and just took all three at home vs. a fellow first-place team in the Braves over the last 10 days.

San Francisco is the next team in the crosshairs for the Dodgers, but L.A has lost 5 of the last 7 vs. the Giants this season. That being said the squads have split the season series 8-8 so far. These two NL West foes are also both tied for the best record in all of baseball going 85-49 in 2021.

Not a Great Pitching Matchup for Giants

San Francisco lost their hold on 1st place for a minute this week, thanks largely in part to dropping five of six against the Braves and Brewers. The Giants were able to pull back to a tie with the idle Dodgers thanks to SF beating Milwaukee 5-1 on Thursday.

The Giants are just +101 underdogs for the series opener (LAD -121), which doesn’t seem like a ton of value with Anthony Desclafani (11-6, 3.38 ERA) the scheduled starter. Not only is Desclafani on the injury report (undisclosed), but has also posted a 9.43 ERA in five starts vs. LA this season. That’s 22 ER allowed in 21 IP in the head-to-head series for Desclafani.

It’s looking like the Giants offense is going to need to provide some run support in this matchup even though the run total is just 8.5. That could be a problem with San Francisco being held to 2 runs or less in four straight prior to the win over Milwaukee last time out.

Something has to give in this matchup between the two best teams in the majors. That being said how do you not take L.A with such a great price of -121? The Dodgers have won 10 of their last 11 on the road, and have hit Desclafani hard this season.