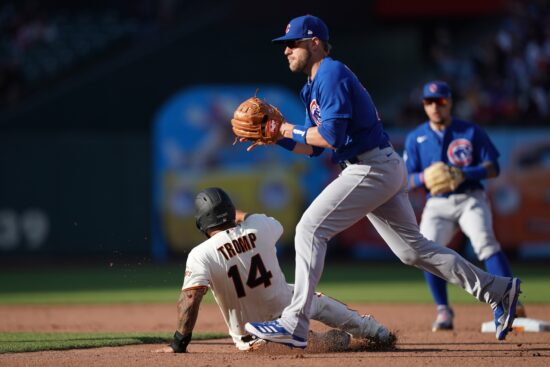 It’s homecoming on Friday for Kris Bryant, as he returns to Wrigley Field this time as a member of the San Francisco Giants. Bryant spent 6+ seasons with the Chicago Cubs, and although his old team is out of the playoff run they’re one of the hottest teams in baseball right now with an 8-1 run over the last 9. SF also has the best record in the majors though (90-50), so this should be a good one.

Giants at a Pitching Disadvantage

San Francisco had lost their grip on 1st place in the NL West over the last 7-10 days, but as they’ve done all season the Giants have bounced back to go up 2.5 games on the Dodgers. SF comes into the series opener at Wrigley Field riding a 4-game win streak and with wins in six of their last seven.

Despite having Thursday off, Giants manager Gabe Kapler has to get a little creative with his pitching strategy. Johnny Cueto has an elbow injury and Alex Wood is on the COVID list so Kapler goes with a band of relievers on Friday. SF used five relievers in Wednesday’s 7-4 win in Colorado, so the day off will help their bullpen get fresh.

Bryant is on a 10-game homerless streak and will be up against his old teammate Kyle Hendricks for the first time in his career. Hendricks is near the top of the MLB in wins (14), but he’s not invincible. Brandon Belt for example is 7 for 19 (.368) in his career vs. the Cubs starter.

Energy is Back at Wrigley

Chicago is 10 games back in the wild card race, but to their credit, the team is still playing with enthusiasm down the stretch. Sure, sweeping last-place Minnesota was unimpressive and a 4-game sweep over Pittsburgh was almost expected, but the Cubs proved they are for real in taking 2 of 3 from the Reds’ last series. That’s a Cincinnati team that is 1 game out of the wild card hunt.

David Ross’ team is getting a number of contributions on their 8-1 run, but it’s a particular dynamic duo that has been leading the way. Ian Happ and Frank Schwindel have both hit above .450 over the past six games, combining for 6 HR and 15 RBI. That should continue with the Giants in a bullpen day.

Hendricks hasn’t been his usual dominant self down the stretch. Counting an 8 ER allowed performance on the South Side vs. the White Sox, Hendricks has allowed 27 runs in his last four starts pitching in the City of Chicago. Hendricks has a 5.56 ERA at Wrigley Field this year compared to 3.73 on the road.

If San Francisco had any semblance of a normal starting pitcher going on Friday they would have great value in this spot. That being said, you also can’t trust Hendricks over this past month especially pitching at home.