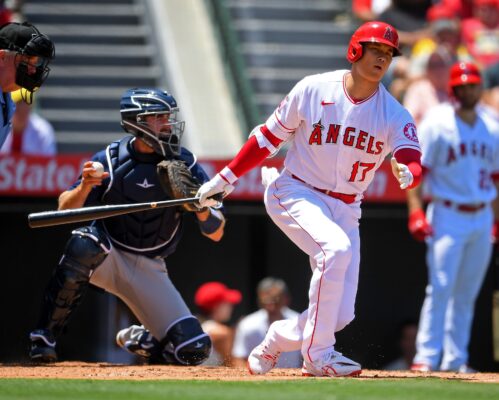 Monday will feature an AL West showdown as the Los Angeles Angels (46-46) take on the Oakland Athletics (53-42). This will be the first of a brief, two-game series between the two.

Coming out of the All-Star break, the Angels dropped their series against the Seattle Mariners over the weekend. They lost two of three, including a 7-4 loss on Sunday. In the loss, Shohei Ohtani hit his 34th home run of the season.

Oakland also lost their series against the Cleveland Indians over the weekend. They won the first game Friday but lost 3-2 on Saturday and 4-2 on Sunday. The A’s managed just four hits in Sunday’s loss.

Shohei Ohtani has easily been one of the most captivating players in all of baseball this season, exemplified by his selection as a starting pitcher and hitter in this year’s All-Star game. After making the start for the American League, he will be making his first start of the second half Monday.

Having lost two in a row and six of their last ten, the Oakland Athletics have fallen to 3.5 games behind the Astros in the division. At 28-24 at home, the Athletics will hope to find success at the Coliseum in this short two-game series.

Oakland will turn to lefty Cole Irvin (6-8, 3.65 ERA) in the opener Monday. In his last start, a 3-2 loss to the Rangers, Irvin went five innings, allowing three runs and striking out five.

Albeit in just six at-bats, third baseman Matt Chapman has had some success against Ohtani in his career. He is two for six with a home run and three runs batted in.

Who wins the Angels vs. Athletics game tonight:

Something has to give in this one. Ohtani took a loss against the A’s on May 28, allowing three runs, while Irvin has given up seven runs in a loss and a no-decision against the Angels this season.

While Irvin has had a respectable season this year, expect Ohtani to show why he was an All-Star. Take Ohtani and the Angels to win on the road against the A’s.