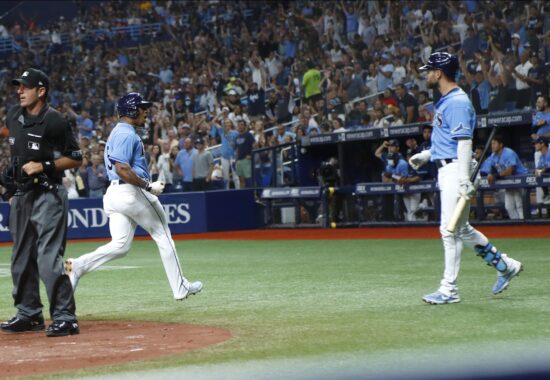 The Seattle Mariners and the Tampa Bay Rays will be meeting for the first game of their three-game series on Monday when the Mariners make the trip to visit the Rays Tropicana Field in Tampa Bay.

This game is essential in both of these teams’ push towards better positioning in the MLB playoff race.

After a very impressive three-game sweep of the Boston Red Sox this weekend, the Tampa Bay Rays now hold a 1.5 game advantage over the Sox for the AL East division lead.

Sean Mclanahan pitched a great game last night to lead the Rays to a 3-2 victory, and in the first two games of the series, the Rays took care of business on the offensive end, scoring nine runs for a 9-5 victory and seven runs for a 7-3 victory.

The Dodgers will try to avoid what could potentially be an embarrassing series loss against the Diamondbacks after all the momentum they are riding high off of from this week’s trade deadline.

After adding mega-veteran and designated hitter Nelson Cruz, the Rays have one of the deeper offensive lineups in baseball. Nelson has not produced too well since entering the Rays lineup after being dealt from the Minnesota Twins, but he is dangerous whenever he makes the trip to the plate.

The race is heating up in the AL Wild Card, with Boston or Tampa Bay expected to hold the top spot depending on who wins the division. The Oakland Athletics, New York Yankees, Toronto Blue Jays, and the Mariners are all in the fold for the second spot, and it’s a tight race.

As previously stated, this game will have a major impact on each team’s ability to maintain a good spot in the AL playoff race.

This will be the second series meeting between these two teams this season after they met for a four-game series back in late June.

The Rays coming off of that sweep versus the Sox have all the momentum compared to a Mariners team who is 5-5 in their last ten games. However, with their better pitchers slated for this series, they should be very competitive.

Key Players for the Mariners

Getting the call on the mound for the Mariners in tonight’s matchup will be their always reliable righty, Chris Flexen. He has been around average on the mound this season with a 3.81 ERA, and the Mariners seem to win when he is on the mound, as he has a record of 9-5. In what will be his 20th start of the season, he will add to his total of 108.2 innings pitched. In those innings, he has given up 114 hits and struck out 69 batters.

Offensively, two men have led the way for the Mariners, and they have been Kyle Seager and Mitch Haniger.

Haniger was a potential piece for the Mariners to move at the trade deadline this past week, but with them still being within reach for a playoff bid, they decided to hold onto his rights and make a push. Haniger leads the team with 25 home runs, is second to Kyle Seager with 63 RBIs, and possesses a batting average of .260.

Their offense has also gotten solid production from infielders J.P. Crawford and Ty France, but the offense needs to pick it up behind their pitching if they want to be a part of the AL playoffs.

Key Players for the Rays

Getting the starting nod for the Rays will be right-handed veteran Michael Wacha. He boasts a sub-par ERA of 4.79. He has allowed 74 hits and has struck out 66 batters over 71.1 innings.

After a series where the Rays were able to contain one of the best offenses in the league in the Boston Red Sox and also get production from their own, the Rays are sure to be riding high.

Leading the way for the Rays in their lineup have been outfielder Austin Meadows and second baseman Brandon Lowe. They both have rallied over 20 home runs on the season to go along with 54 RBIs for Lowe and 76 for Meadows.

Secondary players such as Randy Arozarena and catcher Mike Zunino have also given the Rays a very balanced attack throughout their lineup, especially with the previously mentioned addition of DH Nelson Cruz.

Who wins the Mariners vs Rays game tonight:

The pitching matchup would seem to favor the Mariners in this one, but with the opposite directions that both of these teams have been going in may play a factor in this series-opening game.

Both teams decided to pick up pieces at the deadline rather than unload it in hopes of making deep playoff pushes when October rolls around.

Michael Wacha on the mound does scare me for the Rays, but in his last start, he produced a solid pitching game going five innings, only allowing three hits and one earned run.

He may need to pitch that well again against Chris Flexen for the Mariners, but I’m not worried about the Rays’ ability to get more runs to back up Wacha.