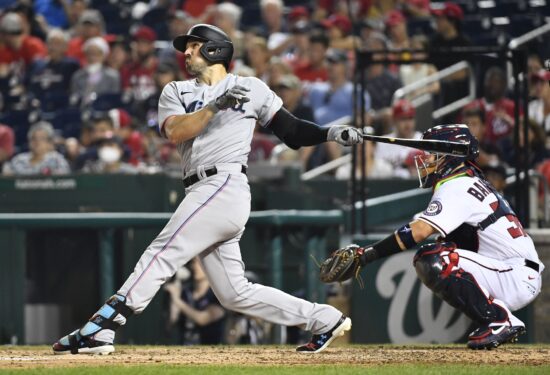 The Miami Marlins and Washington Nationals are set to finish up a three-game series in the Nation’s Capital, as the Nats host the Marlins on Wednesday night. The Nats beat up on the Marlins on Monday and prevailed 6-3 on Tuesday, led by Trea Turner’s two hits, one in which put Washington ahead 4-3 in the bottom of the sixth.

Washington’s Offense Has Been On Fire

The Nationals have scored over 20 runs over their past two games, even with slugger Kyle Schwarber on the IL. Josh Bell has returned to his old self after a sluggish start to the season and homered on Tuesday as a pinch hitter.

Trea Turner is having the best season of his career and has cemented himself as one of the best shortstops in all of baseball. Don’t forget about Juan Soto either, who’s quietly been on a home run tear as of late, as he currently sports a .933 OPS. Alcides Escobar is currently the leadoff man for the Nats and looks like his old 2015 self when he was playing for the Kansas City Royals team that ended up winning the World Series.

Washington will face Marlins right-hander Sandy Alcantara, who’s been really impressive in 2021. Alcantara comes into this matchup with an ERA of 3.23 and a WHIP of 1.15.

Marlins Struggle At The Plate

With Starling Marte constantly in trade rumors, expect Miami to be even worse off when he’s dealt to a postseason contender. The Marlins only average 3.9 runs a game and have a team batting average of .234. It also doesn’t help when your starting first basemen (Garrett Cooper), second basemen (Jazz Chisholm Jr.), and third basemen (Brian Anderson) are both on the IL.

If there are any positives, Miami won’t be facing Max Scherzer in this one. Washington’s Erick Fedde gets the nod for Dave Martinez’s club and is only 4-7 on the season with a 5.32 ERA. In Fedde’s last start, the 28-year-old only lasted 1.1 innings against the Padres, giving up six earned runs on three hits.

Even though the Nats are putting out a starter that makes me a little nervous, their offense has been absolutely on fire, and I like them to keep the onslaught of runs going, even against a solid pitcher like Alcantara. The Marlins may even have the lead through the first five innings, but expect Washington to score on Miami’s bullpen and come out on top. Bet the home team to sweep the three-game series.