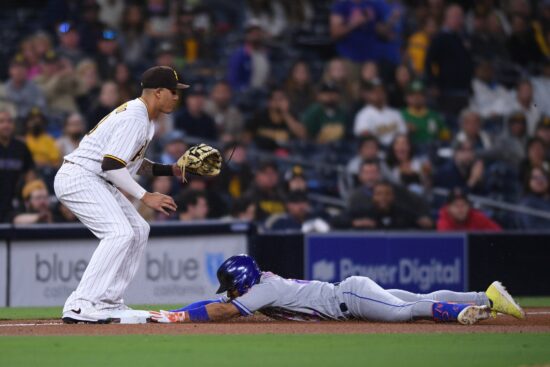 Two of the best teams in baseball are facing off this weekend in San Diego as the Padres host the New York Mets. This has been a good weekend so far for the home team, but they will actually be underdogs in this game.

New York sits atop the National League East standings, and that division has been much worse than anticipated. The Mets are a playoff contender, but they are still looking to play better as the season goes along.

San Diego is currently in second place in the NL West, and that division is loaded with strong teams. The Padres remain a popular pick to win the World Series and can play with anyone in the league.

Jacob DeGrom is on the mound for New York, and he is putting together another record-setting season for the Mets. DeGrom is 4-2 with a 0.71 ERA in 2021, and he has been virtually unhittable in most of his starts.

New York has not been a great offensive team, but they won’t have to do much in this game. If the Mets are able to score at least three runs on Saturday night, then that should be enough for the former Cy Young winner.

Padres Have Some Power

Having Manny Machado and Fernando Tatis Jr. in the middle of the lineup has turned the Padres into a great offensive team. This lineup simply wears down opposing pitchers, but that won’t be easy on Saturday night.

The Padres are one of the highest-scoring teams in the league, and their two stars have shown up in this series. On Saturday, the most important player will be Joe Musgrove as he is on the mound.

Musgrove has already thrown a no-hitter this season, and he will have to pitch extremely well to keep San Diego in this game. He is 4-4 with a 2.08 ERA, and giving up two runs or less has to be the goal.

With two great pitchers on the mound for this game, don’t expect a ton of offense. That actually plays into the hands of the New York Mets, and it should allow them to get back on the winning side of things. Beating the Padres is never easy, but the Mets have the right pitcher on the mound.

Who will win the Mets vs Padres game:

DeGrom is simply too good, and he will deliver an important victory for the New York Mets in a low-scoring affair.