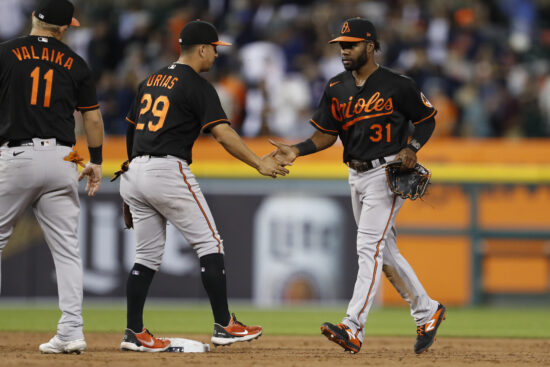 Postseason hopes passed both the Baltimore Orioles and Detroit Tigers a long time ago, but neither squad has completely call it a year just yet. Both teams are .500 or better over their last 10 games, and each has picked up a win so far in this 4-game weekend series. Oddsmakers are calling this one tough to gauge, listing the O’s at -115 and Detroit -105 at home.

Baltimore is 25.5 games off the pace in the AL East, but have been a profitable team to back lately while winning 5 of their last 7 games. That includes a 4-3 win on Friday as +139 underdogs in Detroit. The Orioles are still just 19-35 on the road this season, however.

It wasn’t the greatest offensive production in Friday’s win, but a couple of Pedro Severino HRs and another from Ryan Mountcastle proved to be the difference for Baltimore. It was a nice bounce back from a 6-2 loss in Thursday’s series opener, and now the Orioles seek at least a split for the 5th straight series.

Oddsmakers like John Means on Friday, making the Orioles slight favorites behind their starting pitcher. Means has a sub 3 ERA on the season, but did allow 4 ER over 6.1 IP his last time out. One thing the left-hander will do is serve up the long ball, allowing 9 HR over his last 5 starts which does make the over 9.5 a bit more enticing in this matchup.

Tigers Need Their Offense Back

Detroit was stymied by Matt Harvey of all people in Friday night’s loss. The O’s starter picked up the win by tossing 6.1 IP of shutout ball. Detroit rallied a bit with 3 runs in the 8th, but ultimately couldn’t complete the comeback.

Was that a rare offensive shortcoming for Detroit? After all this is a team that had put up 34 runs in their four games prior, led by Miguel Cabrera who is 9 for his last 18 with 3 HRs. Eric Haase has also driven in 11 runs over his last six games, providing some pop from the catcher position.

The Tigers are still a slight home underdog on Saturday, so is that an indictment on starting pitcher Matt Manning? The 6’6” rookie is making just his 8th MLB start in this contest, and the Tigers have alternated wins and losses in each of his previous 7. That bodes well for Detroit coming off a 6-5 loss to the Twins in Manning’s last outing.

It’s a toss-up game, but it’s hard not to like the Tigers in a bounce-back game for their offense. Detroit is a 29-23 team at home on the season.