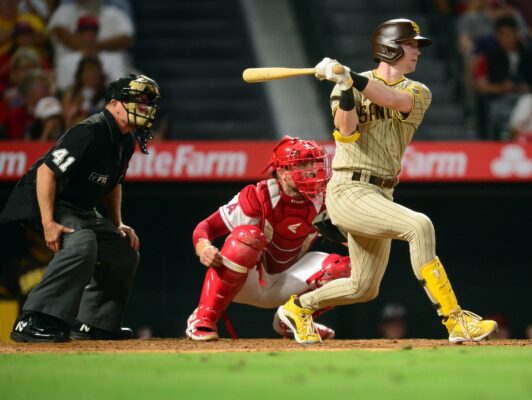 With the Padres carrying a better chance to earn a Wild Card spot, they will look to earn a second straight victory in this series against a fellow Californian side on Saturday.

It was a painful four-game stretch for the San Diego Padres prior to Friday’s win over the Los Angeles Angels. San Diego had lost their series finale to the Philadelphia Phillies before dropping three crucial games in a row against the Los Angeles Angels. Now, the Padres are back in the win column and are looking to keep their postseason prospects alive with continued success against the Angels.

In picking up a shutout victory against the Angels on Friday, the Padres got the first shutout from their pitching staff in 17 games. Unfortunately for the Padres, it is unlikely that they get that kind of pitching performance again on Saturday, as Ryan Weathers has really struggled this season. Weathers comes into Saturday’s start against the Angels with an ERA of 5.27, giving up 17 home runs in just over 80 innings of work on the year.

The pitching of the Angels hasn’t helped things either, as Los Angeles has allowed ten or more runs in three of their last four games. Jose Suarez will take the mound to try and buck that trend on Saturday, though his 4.06 ERA doesn’t necessarily inspire confidence either. For now, the Angels would settle for either a solid offensive or defensive performance.

Both teams are sending struggling pitchers to the mound for this game and aren’t playing their best baseball right now. Instead of putting trust in either team to win the game, the over ten runs market is the best bet for this contest. Expect runs early and for both bullpens to be overworked tonight, leading to plenty of runs later in the game as well to push the game over the total.