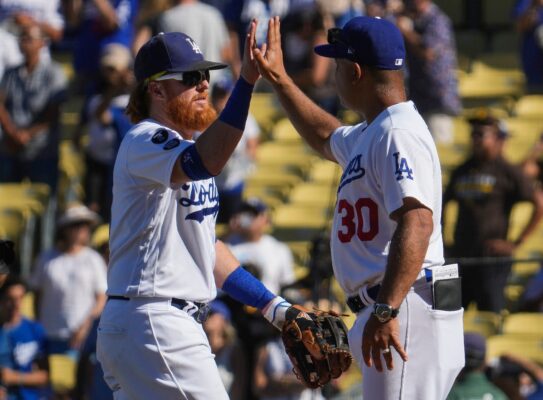 The San Diego Padres are currently in a tie for the 2nd wild card spot in the NL, but they’ve got plenty of company with the Reds, Cardinals, Phillies, and Mets all within 3 games with about three weeks left in the season. SD needs a big outing from Yu Darvish on Monday as they visit a San Francisco Giants team on a 7-game winning streak.

All on Darvish Here

One of the best chances the Padres have on Monday night is a 3-1 type win on the back of a strong Yu Darvish (8-9, 3.95 ERA) outing. You just can’t trust San Diego’s offense right now as they’ve been shut out in 3 of their past 5 games, albeit the last two by Julio Urias and Max Scherzer.

The only problem is that we don’t know what to expect from Darvish either.  Since July 1st the right-hander has given up at least 4 ER in 7 of 10 starts. He missed two weeks in the middle of August with lower back tightness and has allowed 10 ER in three starts since coming back. That does include 6 innings of 3-hit, 1 ER ball last time out in a win over the Angels though.

The Padres just got done running through a gauntlet of Urias, Walker Buehler, and Scherzer – three of the top four Cy Young candidates in the NL. You have to think they get a bit of a reprieve up against San Francisco in a bullpen outing on Monday night.

The Dodgers have kept a torch to the tail of the Giants all season long, and San Francisco has answered the bell every time on their current 7-game win streak. SF looked like they might be vulnerable in a 3-game set in Colorado against a Rockies team that is great at home or in a 3-game cross-country trip to Chicago against a Cubs team that has been streaking lately. Nope, the Giants took all six while scoring 56 total runs.

The San Francisco bats have a tough test against Darvish, and haven’t faced him since the end of April. Darvish also had a 2.13 ERA in April, a number that has ballooned to 6+ in July, August, and September not to mention being 5.40 on the road compared to 3.19 at home.

Oddsmakers like the Giants at -120 in this spot even while likely pitching a bullpen game. Anthony Desclafani is up in the rotation but he’s battled injuries over the past month and lasted just 4-1/3 the last time out albeit at Coors Field. Dominic Leone is the scheduled ‘opener’ tossing 2 innings on Friday vs. the Cubs before giving way to the bullpen as scheduled.

It hasn’t been very profitable betting against San Francisco this season, but they are up against it having to do a bullpen day against a San Diego team that is anxious to see somebody that isn’t a Cy Young candidate.