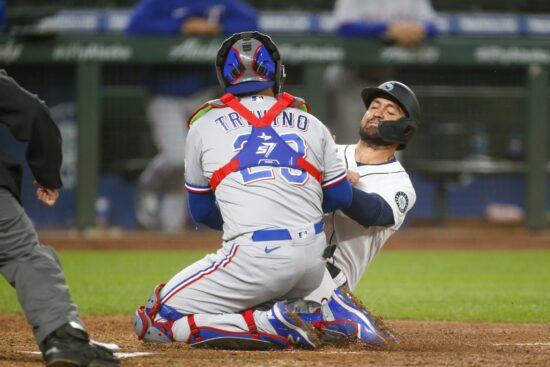 Friday’s American League slate wraps up in the AL West as the Texas Rangers (22-30, 9-17 Away) continue their long weekend series with the Seattle Mariners (24-27, 13-12 Home) in the Emerald City. The Mariners blanked the Rangers in the opener on Thursday to even up the season series at two games apiece entering Friday.

The Rangers have now exchanged three-game winning and losing streaks over their last nine contests dating back May 18. After knocking off the Yankees in that series opener, they dropped three straight to New York, swept Houston, and have now lost a trio of games heading into the second tilt of this current four-game set with Seattle.

Adolis Garcia remains tied for the MLB-lead in home runs with 16 as he continues to make a case for AL Rookie of the Year. But it was the 28-year old’s defense that was on display Thursday, as the centerfielder robbed a homer away from Mitch Haniger (who has 13 in his own right) in the bottom of the first, contending with fans reaching over the wall in the process.

Dialing it up at T-Mobile

The Mariners have recently displayed positive responses, winning three of their last four after a season-worst six-game losing streak. Chris Flexen also followed up his worst outing of the season with his best performance on Thursday. The 26-year old righty scattered just three hits over seven shutout innings against Texas after allowing eight runs last Friday, unable to escape the second inning in a blowout loss to the Padres.

Jack Mayfield contributed on the offensive side for the M’s, delivering his first double of the season in the seventh, which also doubled as his first hit as a Mariner in front of the home crowd after being claimed off waivers from the Angels in April.

The pitching matchup features Jordan Lyles going up against Justus Sheffield on Friday. Lyles is 1-4 with a 6.48 ERA in nine career appearances against Seattle, including seven starts. Sheffield is 1-1 with a 4.29 ERA in four games against Texas, with three starts.

Seattle opened as a slight favorite, but the number has been climbing ever since. The Mariners are 20-8 when scoring four or more runs this season after Thursday’s win, and we expect the scoring to come early and often to kick off the weekend in an eventual Seattle slaying.