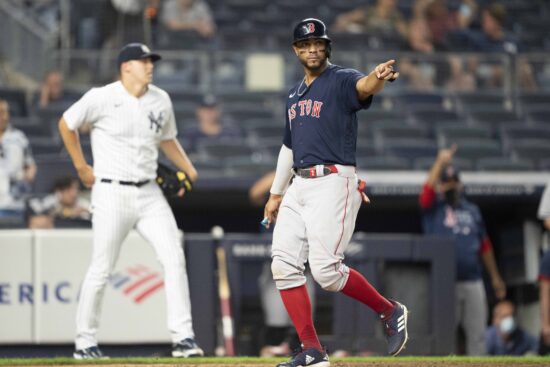 The Yankees will look to avoid the sweep as the Red Sox have already clinched a series win. Boston came back from a 2-0 deficit with a three-run sixth inning. After New York tied the game at three apiece, Boston put the game away with a four-run eighth inning.

Boston has won three in a row and find themselves only one game back of the Tampa Bay Rays for first place in the AL East. The Red Sox have a run differential of +51.

The Red Sox offense ranks top ten in every offensive category. They are second in slugging percentage, third in batting average, fourth in runs, and eighth in slugging on-base percentage.

Richards has been solid for Boston in his 11 starts. He has thrown 60 innings allowing 59 hits, 30 walks, and 25 earned runs. However, his WHIP of 1.48 indicates that his ERA is due to go up.

Red Sox hitters have had some success against German in the past. They have combined for an OPS of .744 in 53 plate appearances. Xander Bogaerts is 4 for 10 with a double and a home run.

No one once to get swept at home, but New York being swept by Boston on Sunday Night Baseball would have Yankees fans steaming. New York has fallen five games back in the division and would really like to remain within striking distance of the Red Sox and Rays.

What should have been a potent New York offense has been anything but. Instead, they rank near the bottom of the league in batting average, on-base percentage, and runs.

Aaron Judge is the only regular with an OPS over .800 at .928. He leads the Yankees in batting average, hits, home runs, on-base percentage, and RBIs.

German has been outstanding this season but has come down to Earth in his last two starts. He has not gotten out of the sixth inning in either start. He has a WHIP of 1.04 on the season.

Yankees hitters have struggled against Richards in the past. They have combined for an OPS of .553 in 66 plate appearances.

The Yankees are a slight favorite at -145. However, with New York struggling against Richards and New York’s offense already struggling, I like Boston in this one. The Red Sox leave Yankee Stadium with a sweep, and New York fans will really start getting nervous about the team’s playoff chances.