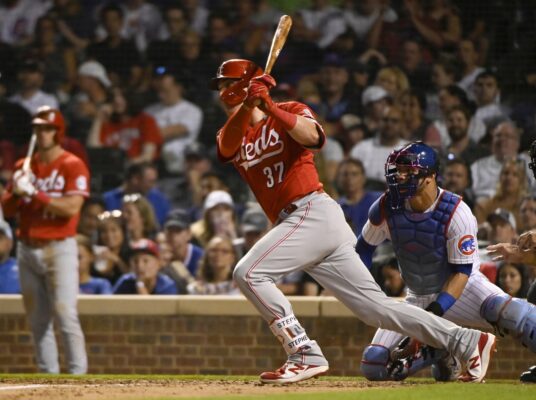 The Chicago Cubs will host the Cincinnati Reds on Tuesday night for game two of their four-game series. Chicago took the series opener by a score of 6-5, and both of these teams have had an up and down season.

The Reds have been playing better baseball overall, and they enter this game with a record of 51-49. Cincinnati is still seven games out of first, but they are in second place in the NL Central.

Chicago comes into Tuesday night with a record of 50-51, and that has them in fourth place in the NL Central. The Cubs will likely be major sellers at the Trade Deadline over the next few days.

Reds Have Some Power

The Cincinnati Reds have some areas to clean up if they want to win the NL Central Division, but this team can really score. Cincinnati has scored 482 runs this season, and most of that damage comes via the long ball.

Jesse Winker leads the team with 20 home runs, and he had three hits on Monday night in the series opener. The Reds should be able to do some damage against a pitcher that gives up some home runs.

Vladimir Gutierrez starts for the Reds in this game, and he has gone 4-3 with a 4.97 ERA this year. Gutierrez needs to find a way to cool off some of the hot bats for the Cubs.

Adbert Alzolay will start for Chicago on Tuesday night, and he is a big part of the future for the Cubs. Alzolay has gone just 4-10 with a 4.58 ERA this year, but he has the tools to shut down most lineups in the league.

The Cubs put together a late rally on Monday night, capped off by a huge pinch-hit by Javier Baez. Willson Contreras also had a big home run in the win, and this team still has big names in that lineup.

Expect plenty of offense in this game as neither team has a dominant starter going. This typically would favor the Reds, but it will be the Cubs that put up some runs in this one.

This might be the final series for the core of the Chicago Cubs, and they seem to be enjoying the ride. The Cubs will ride that momentum into another win on Tuesday night as they beat the Reds two games in a row.

Chicago puts together a dominant performance in beating the Reds again.