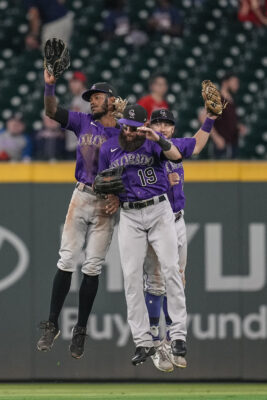 Just when you thought the Colorado Rockies were a sure-fire loss on the road, they turn around and take three of four in Philadelphia and then a series-opening 5-4 win over the Atlanta Braves at Truist Park. The Phillies and Braves are in the NL wild-card hunt and Colorado has nothing to play for (28 GB in the NL West) so these are strange days indeed.

Where Was this Rockies Team All Season?

The NL West is the best division in baseball this season, with the Giants and Dodgers on pace for 100 wins each and the Padres right in the thick of things for the 2nd wild card spot. You have to think Colorado would at least be in the considerations for a postseason berth if not for their 22-51 road record. The Rockies are one of the best teams in the MLB at home (45-27).

Being away from Coors Field hasn’t bothered Colorado as they’ve won 4 of 5 on their current 10-game road swing. That includes Tuesday’s 5-4 win in Atlanta as +134 underdogs thanks to HRs from Brendan Rogers and Trevor Story as well as 5 innings of 2 ER ball from Jon Gray.

Colorado was 17-50 on the road at one point this season, but even after winning 5 of their last 6 away from Denver do you trust them at +175 on Wednesday night? That’s a huge jump from Tuesday’s +134 line, meaning oddsmakers must not be too enthralled with Rockies starter Antonio Senzatela (4-9, 4.11 ERA). The right-hander has been pretty good lately though, giving up just 3 ER in his last three away from Coors Field.

Braves Cruising to the Finish Line

Atlanta losing on Tuesday isn’t that big of a surprise, as they’ve entered the point in the season where the division is all but wrapped up. The Braves have a 4.5 game lead over the Phillies and are 5.5 up on the Mets – two teams that are 7-13 over their last 20 during the most important time of the season.

The Braves got just 4.0 innings from Touki Toussaint on Tuesday night so they’re hoping for a quality start from Huascar Ynoa (4-5, 3.22 ERA) in game two. The Braves have lost three of Ynoa’s last four starts, including 4-3 in Colorado on September 3rd as -135 favorites. The two teams split that four-game series at Coors Field.

Atlanta will consistently give you 4+ runs, as they’ve done in 8 of the last 9 games – it just all comes down to what the Braves pitching does. Ynoa has a 2.45 ERA at home in 7 starts this season compared to 4.18 in six road starts. Charlie Blackmon has gone deep in one of his two ABs vs. the Braves starter, but overall there’s not a lot of experience between Ynoa and Colorado (5 for 18 as a team).

Colorado’s upset win on Tuesday was kind of telling considering the line was just +134 for Colorado. Oddsmakers are making us pay for the Braves win on Wednesday night though (-210). That’s a good indicator that Ynoa does indeed dominate, and Atlanta continues their decent offensive run as of late.